Victor Mee Auctions has announced its first sale of 2020, the Pub Memorabilia and Irish Whiskey Collectables Sale, which is scheduled to take place at the Cloverhill saleroom on Wednesday 29th January. 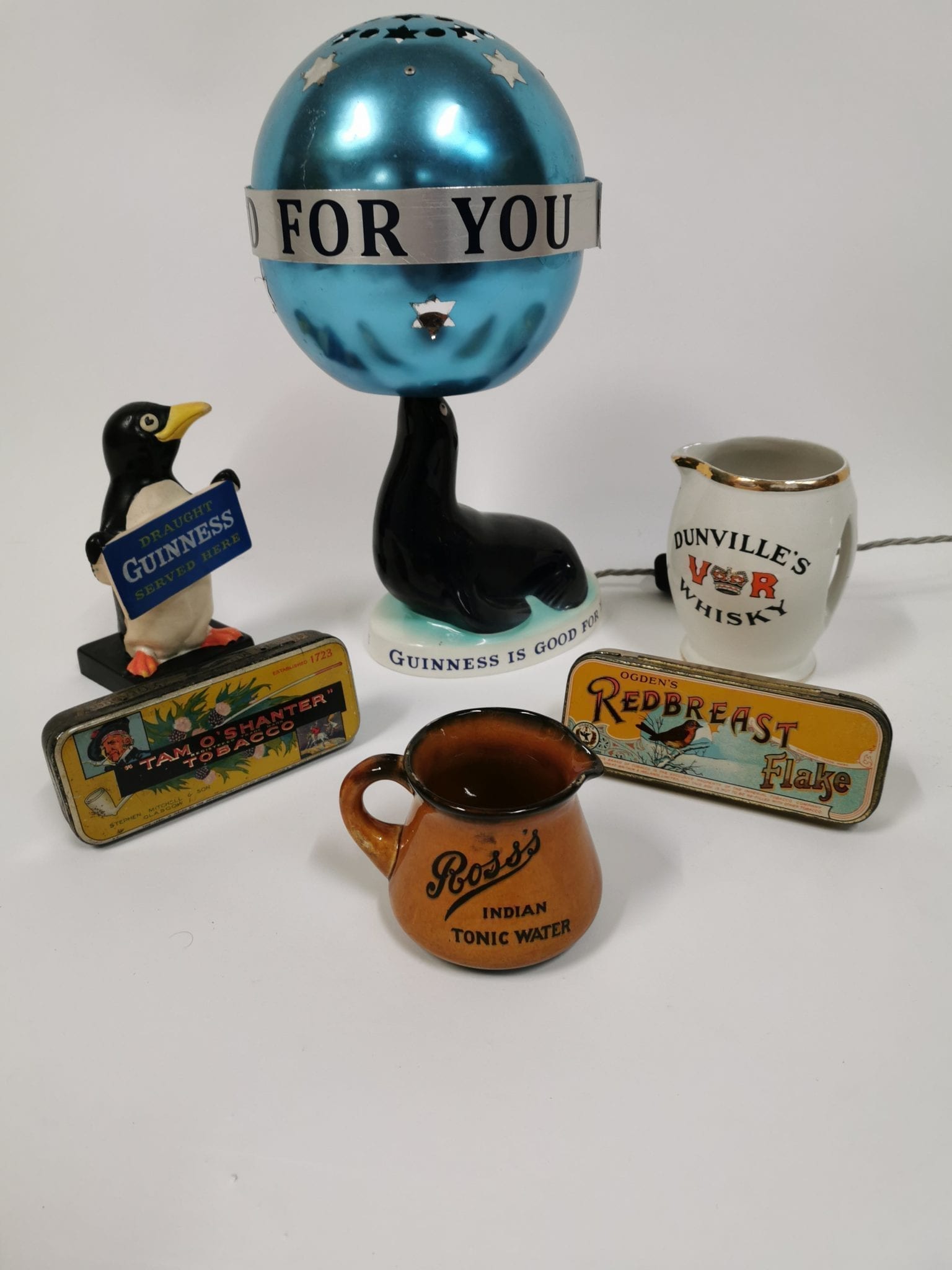 Kicking off the new year with one of their most popular areas of expertise, the team at Victor Mee Auctions has announced their first sale of 2020, the Pub Memorabilia and Collectables Sale, which is scheduled to take place at the Cloverhill sale room on Wednesday 29th January.

A passion of auctioneer Victor Mee, pub memorabilia has quickly become recognised as a specialised, recurring theme at the Cavan auction house, with pub memorabilia sales proving to be some of the most popular and best-attended sales throughout the year, with dedicated collectors traveling to Cavan to be present in the sale room and tuning in by phone and online from around the world.

The upcoming Pub Memorabilia and Collectables Sale will feature an array of exquisite and highly collectable pieces that have been consigned to the Victor Mee Auctions team by a range of respected Irish collectors and tradespeople. Deemed extremely special by auctioneer Victor Mee and his son Bryan, many of the lots set to appear have been kept safely within the auction house to be introduced to bidders exclusively for the January sale, with many pieces guaranteed to attract the attention of buyers from around the world.

Pub memorabilia is highly coveted, particularly by those abroad wishing to bring a piece of genuine Irish memorabilia into their own establishment. Pieces featuring globally-known Irish heritage brands including Guinness, Jamesons, Murphy’s, and Paddy’s are some of the most popular items, and authentic pieces contribute to the ambiance of homes, bars and pubs and are generally considered more desirable by publican collectors and owners hoping to bring a sense of authenticity to an Irish pub abroad.

The Pub Memorabilia and Collectables Sale is expected to garner high interest, resulting in high bids, with many lots of Irish publican history featuring amongst some of the rarest that Victor Mee Auctions team has ever come across.

Advertising mirrors are a firm favourite with bidders at Victor Mee Auctions and are a great way to add some traditional character to any home, bar or outhouse. The upcoming auction will include a range of exquisite whiskey and tobacco mirrors with the star of the show being a Shamrock Whiskey advertising mirror, etched and gilded by hand by Kirker and Greer of Belfast in 1910. One of the rarest advertising mirrors Victor Mee has seen on the market to date, this piece has been given an estimate by the auctioneer to sell between an incredible €5,000 to €10,000 and features the iconic Shamrock lady print in the centre of the mirror, exquisite gilded lettering and framed in a hand-carved wooden frame. The mirror also includes the ‘Veritor’ label, which was a brand that during the early 1910s marketed the Shamrock along with three other Irish whiskeys; Mitchell’s Holly, Corbett’s 3 star and Tyrconnel 3 star. 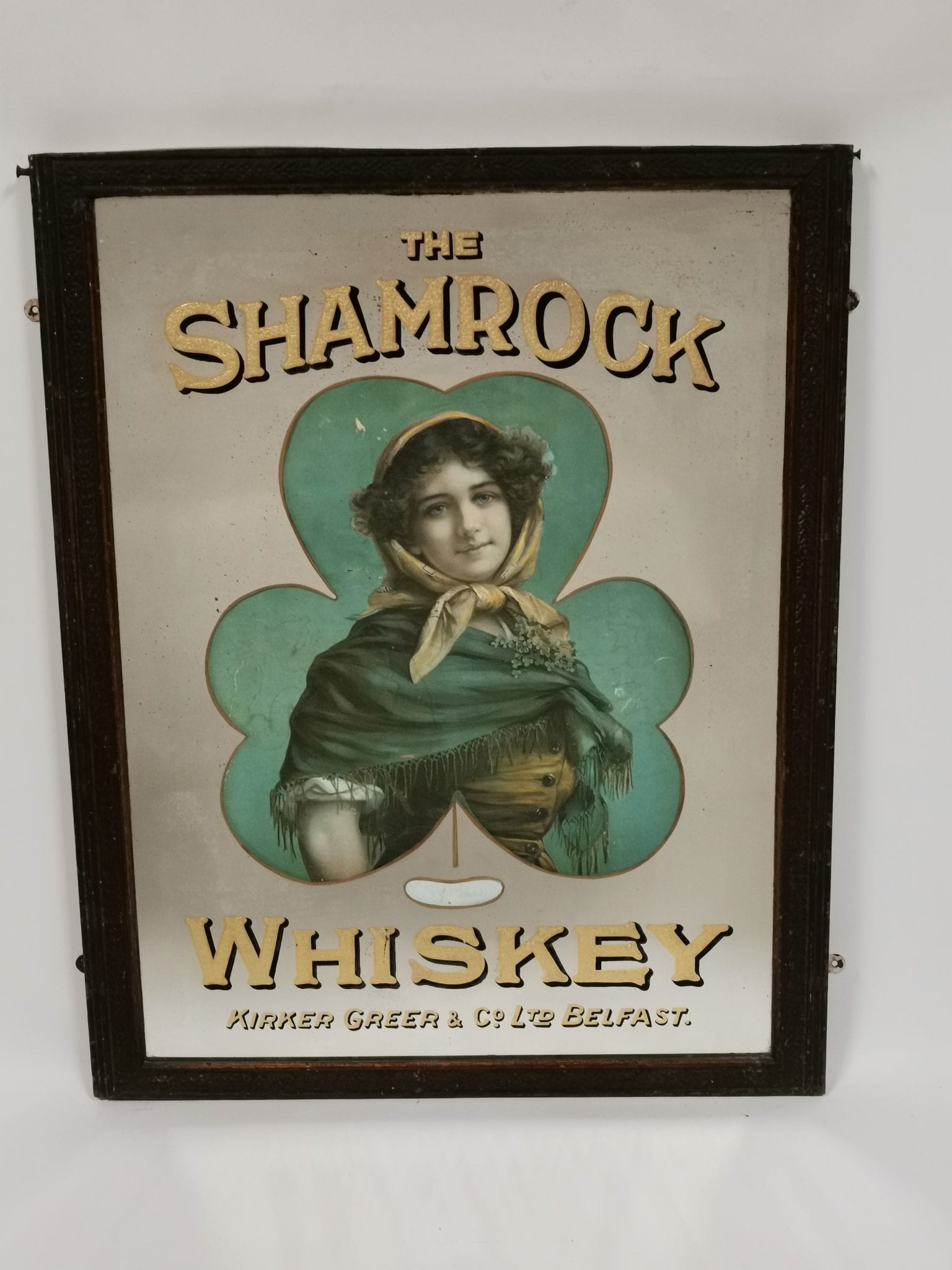 In addition to the Shamrock Whiskey mirror, interested bidders with a more modest bidding budget will also have the opportunity to take home a Will’s Gold Flake Cigarettes Advertising Pillar Mirror and a Paddy Whiskey Cork Distillery Advertising Mirror, both dating back to the early 20th century, with the whiskey mirror estimated to sell at auction between €2,500 and €4,500. 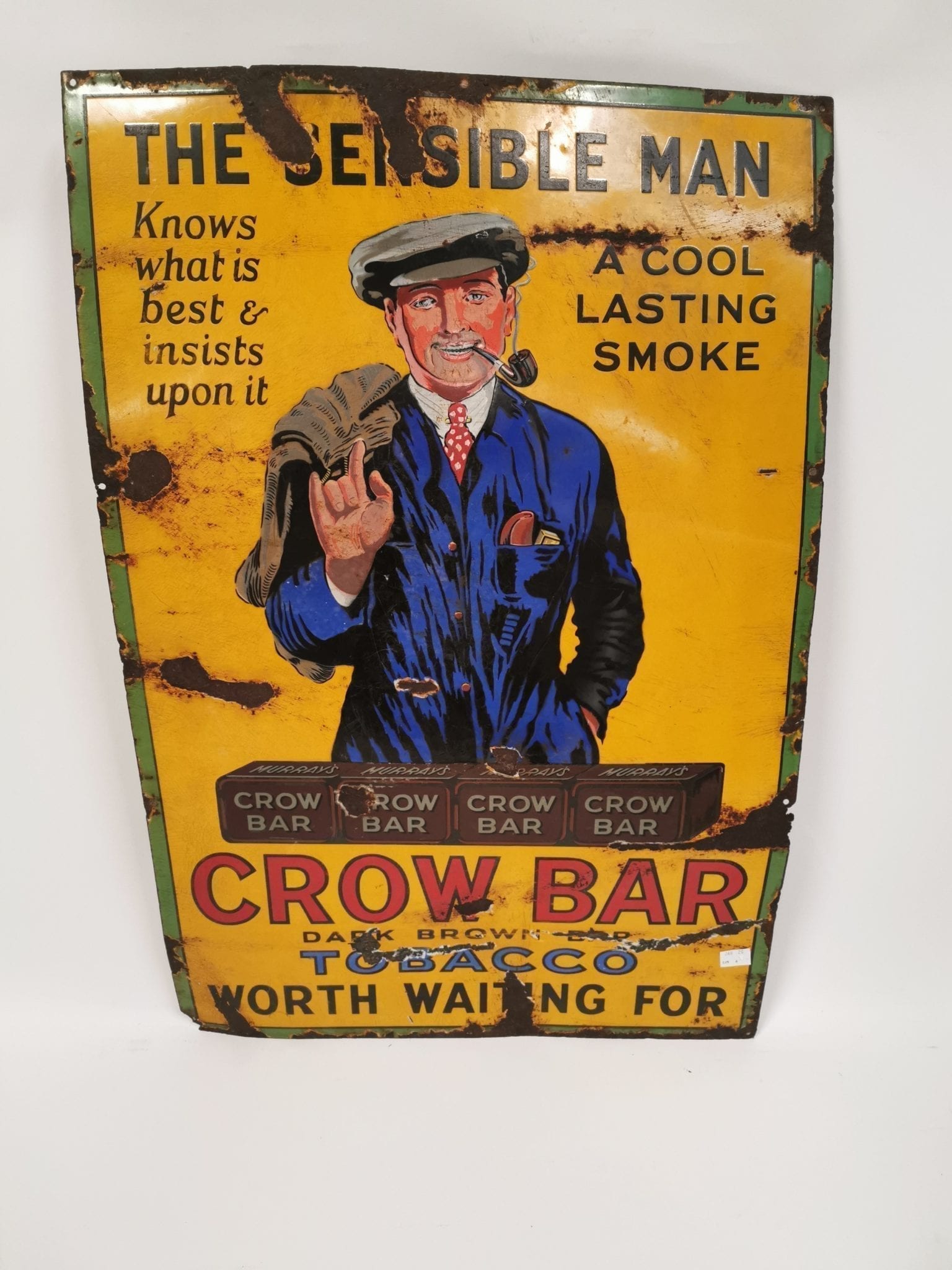 Publican advertising is a running theme at Victor Mee Auctions, but the team has also seen growth in the popularity of quirky and humorous pieces in the advertising and memorabilia sales. One outstanding example in the upcoming sale features the Sensible Man Sign, an advert for Crow Bar tobacco, featuring a gentleman who “knows what’s best and insists upon it”. This piece is an example of advertising that consumers simply would not see today, but makes for a fantastic conversation piece, lures the eye in, and educates on a bygone era of Irish advertising.

Commenting on the collection of advertising pieces that will be offered up to auction-goers, Victor Mee said:

“Advertising mirrors and signs have always brought with them a tremendous amount of interest from bidders across the world. Advertising mirrors like the ones up for grabs in this auction are highly sought-after by collectors. At the time of production, they were very expensive to manufacture and often gilded, requiring specialised skills to paint – they are a true example of art in advertising.”

“The fragile nature of glass means that many advertising mirrors have not survived the years since their manufacture, meaning those that remain have been ‘stamped’ with exclusivity and a rarity that all collectors desire. We are extremely proud to have a great selection of mirrors, all in a healthy condition, and we expect that this will increase the value and interest in these unique lots.”

An authentic range of Irish Collectables

The upcoming sale at Victor Mee Auctions will also feature a range of marvellously preserved collectable items that have been reserved from some of the most exclusive Irish retail establishments and factories. Within the collection, a firm favourite of the auction house to hit the auction block on 29th January is a rare Ogden’s Cigarette Dispenser dating back to the 1890s. The piece is estimated to sell for between €2,500 and €4,500.  These dispensers were usually only found within the most fashionable shops and would have served the most high-class shoppers. 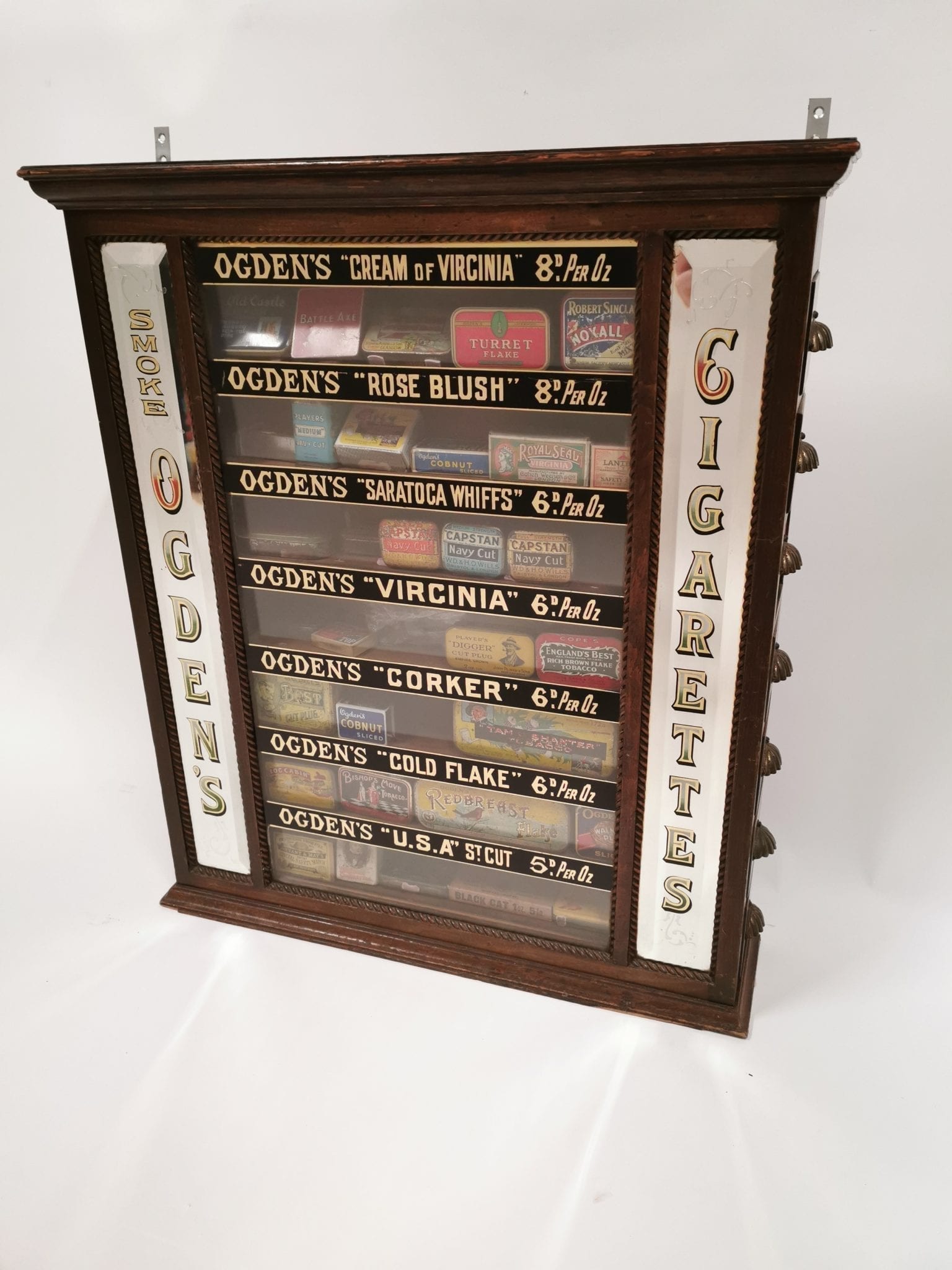 In addition to the Ogden’s Cigarette Dispenser, the January sale at Victor Mee Auctions will also showcase several other collectible Lots including a Frys Chocolates Display Cabinet with mirror top. This display cabinet is another high-class piece of antique shop fitting from the early 20th century that would have sat atop of the store counter and invited shoppers to indulge themselves with a high-born treat. 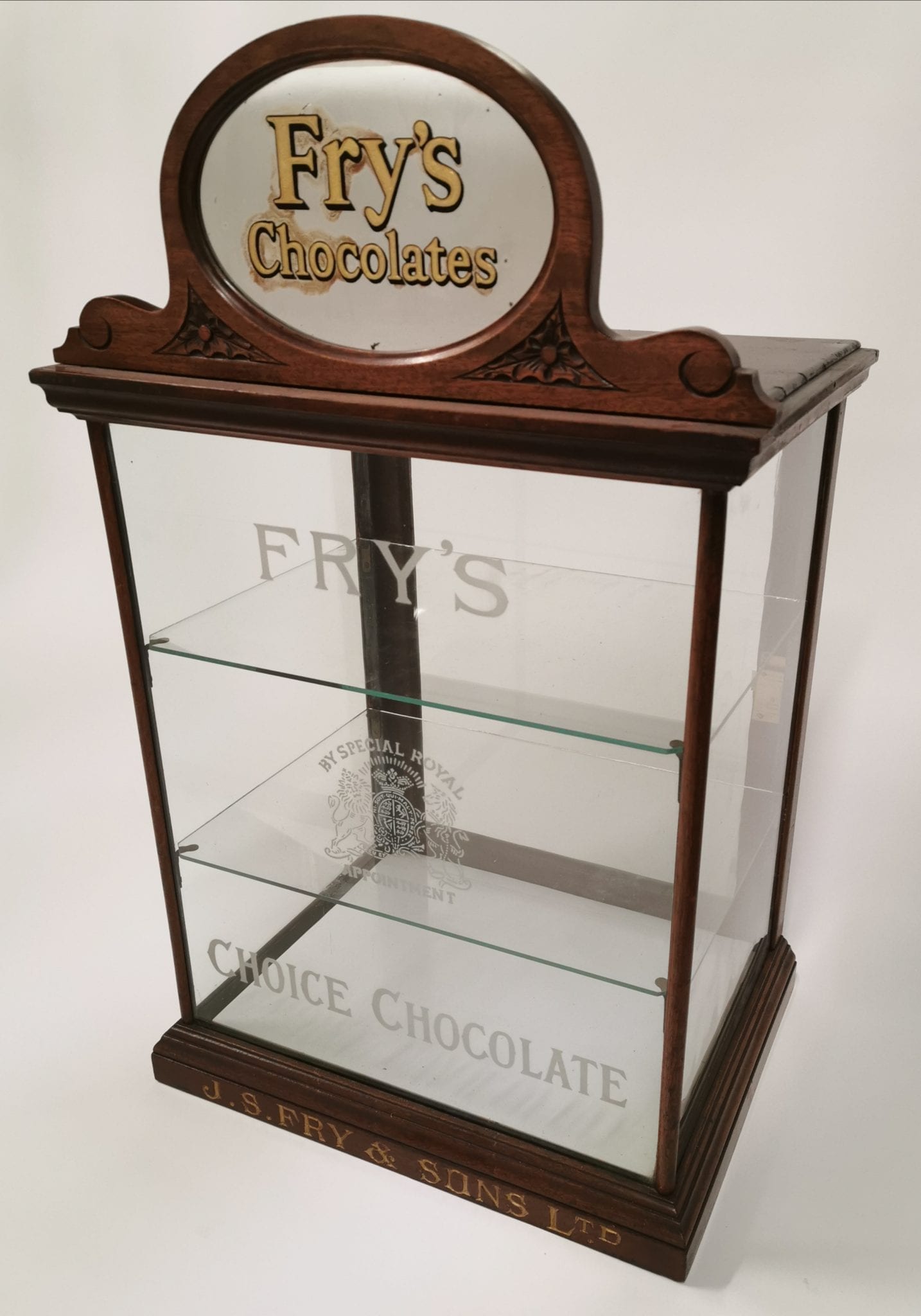 Part of the attraction of this lot for buyers is the large top pediment which is made from mirrored glass. Most display cabinets from this era would have pediments made from milk glass. This variation in style contributes to the exclusivity of this lot along with it’s larger than normal size and carefully etched wooden surround. With three inner shelves, the cabinet is surrounded by clear glass marked with a coat of arms, “By Special Royal Appointment”. The wood is etched again at the bottom in gold lettering with the company’s iconic “J.S. FRY & SONS LTD” trademark and we expect great interest in this particular lot on the 29th January. 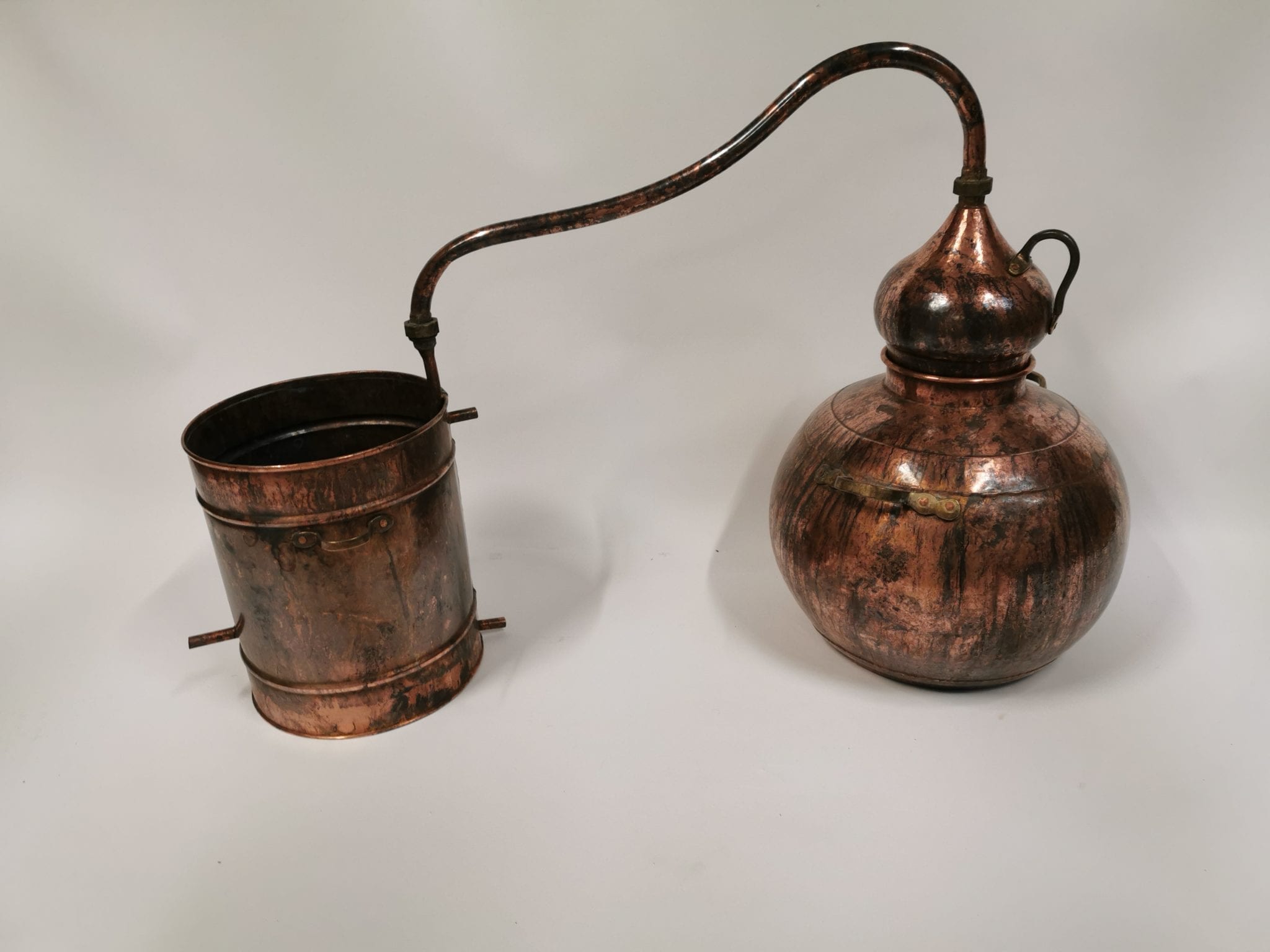 Another lot in this sale expected to garner a lot of interest from buyers is a traditional pristine condition copper Irish whiskey still. Making a fantastic decorative addition or focal point in a bar or distillery, with a nod to the bygone methods of distilling, Victor Mee Auctions has placed an estimate of €600 to €1,200 on this piece. 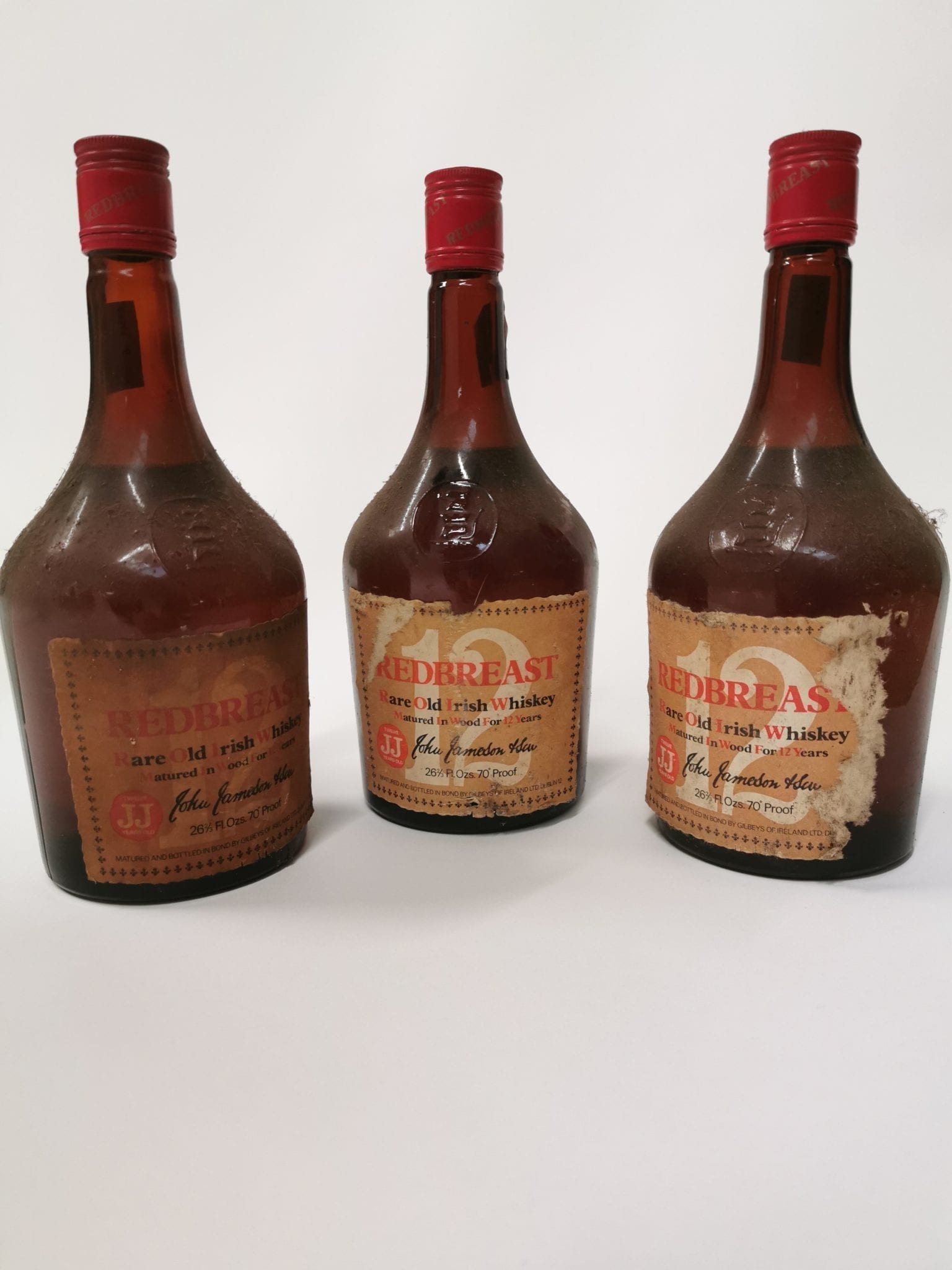 In keeping with the whiskey theme, a superb collection of six 1960s Red Breast 12-year-old whiskey bottles estimated to sell between €250 and €450 each will be available to interested bidders. The vintage whiskey collection has been taken from the old Jameson Whiskey distillery in Bow Street which closed in 1971 and moved to Middleton, Cork. 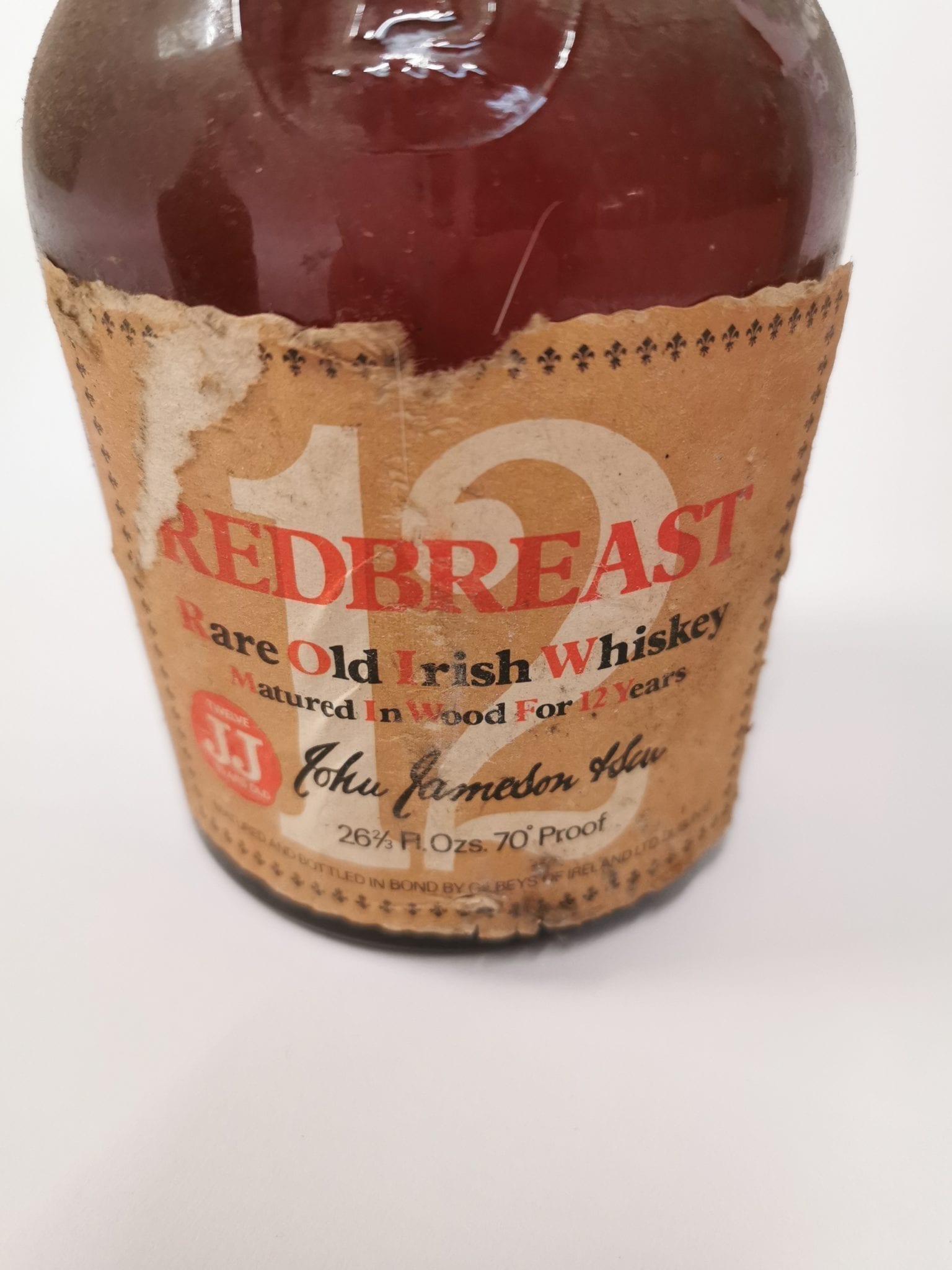 The Victor Mee team believe these bottles to have been bottled in the 1960s and aged for twelve years in Gilbeys sherry casks. Production of Redbreast was ceased by Gilbeys in 1985 before the brand was relaunched to the market in the early 1990s meaning unopened bottles in great condition are extremely rare to find in today’s modern market.

“After such a successful 2019 at the auction house we are very excited to see what a new decade at Victor Mee Auctions has in store for us and our clients. Our Pub Memorabilia and Collectables Sale is expected to draw in a lot of interest from both local and international buyers, perhaps hoping to furnish various bars and establishments with authentic Irish memorabilia at home and away.”