Powers Irish Whiskey owned by Irish Distillers at Midleton Distillery have just announced details of a complete rebranding of their iconic and historic Powers brand. 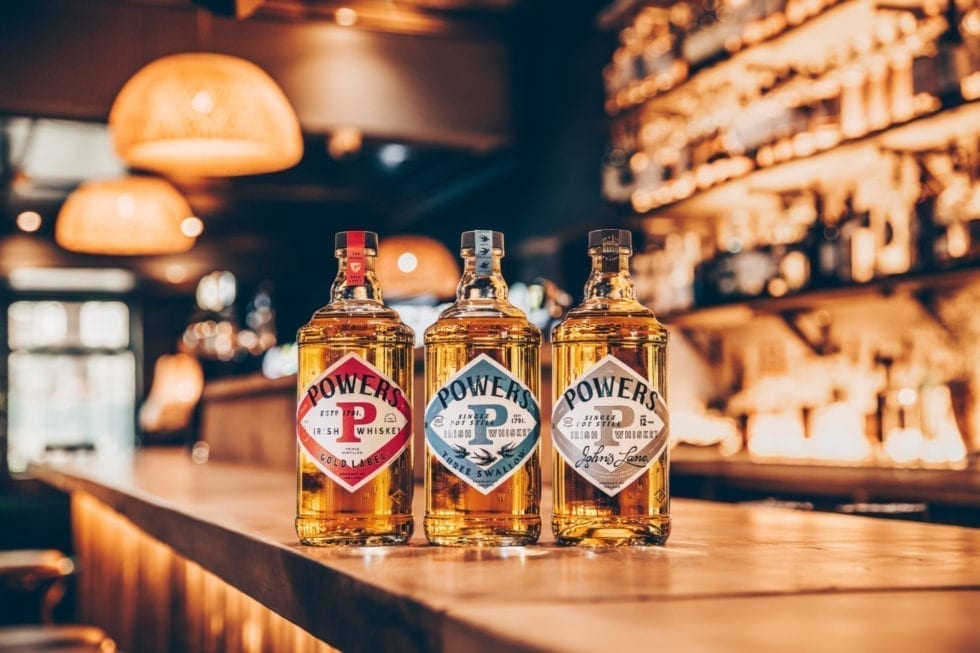 Powers Whiskey has always been to the vanguard of promoting heritage and excellence in the unique Irish Whiskey style that is Single Pot Still Whiskey. Included in the rebrand are the Powers John’s Lane and Three Swallow Single Pot Still expressions.

As a lifelong fan and loyal customer of Powers Irish Whiskey, I’m at a loss for words and slightly underwhelmed on my first sight of the new branding, bottles and labels to be deployed on these premium whiskey expressions. It’s unclear from the press release if the wonderful premium outer packaging, especially the beautiful gift box and information pack that came with the John’s Lane bottles is also being discontinued.

I’ll try and find out more before I share my thoughts over at WhiskeyBlogger.com in the next week or so.

In the meantime, here’s the official press release from Powers Whiskey.

Powers Irish Whiskey, which is made by Irish Distillers in Midleton Distillery, has unveiled a bold new bottle design for its range of premium Irish whiskeys. Debuting on core expression Powers Gold Label in the USA from March 2020, the dynamic new look is set to attract a new generation of drinkers to one of Ireland’s most loved whiskey brands.

The design features a new bottle shape which has been inspired by the distinctive pot still silhouette from the brand’s historical home at John’s Lane Distillery. Another striking aspect of the new design is the label which is styled on the iconic Powers ‘diamond P’ – one of the first ever trademarks registered in Ireland and a link to the legacy of Powers and Irish whiskey history all over Ireland. Each whiskey in the Powers range is presented with a label in a different colour to bring to life its unique story; Powers Gold Label in red, an homage to the original red Powers diamond marque; Powers Three Swallow in blue, a nod to the feathers of the graceful bird; and Powers John’s Lane Release in metallic ink, to reflect the industrial innovation that the Powers family demonstrated at the original distillery established in 1791 on John’s Lane, Dublin.

“Powers sense of identity has always focused on the diamond P; that became very clear to me as I worked my way through the historical archive. The diamond P was everywhere; on the casks, stationary, on bills and receipts, emblazoned on everything that left the distillery, and notably on the wonderful Powers mirrors that still hang in Ireland’s pubs today. Workers at the old John’s Lane distillery even took to wearing a diamond P pin on their lapel, such was their pride to be part of the Powers family. For me it’s wonderful to see the diamond P front and centre on this new label, symbolising all the history of this great whiskey since 1791.”

“Powers has been famous for its bold taste profile and character since the family distillery was established in 1791. We are excited to introduce this new look to the world and inspire a new generation with the unique history and personality of Powers. At Irish Distillers, we have pride in Powers as one of the world’s leading Irish whiskeys and we welcome this dynamic new chapter for the brand as we seek to continue the Irish whiskey renaissance around the world.”

New packaging for Powers Irish Whiskey underpins recent innovation for the brand as it seeks to reach and inspire whiskey drinkers including; the release of Powers Old Fashioned, the brand’s first ever pre-mixed classic cocktail; and the Powers Quarter; a collaboration between six Dublin bars to tell the story of Powers and its illustrious Dublin history.