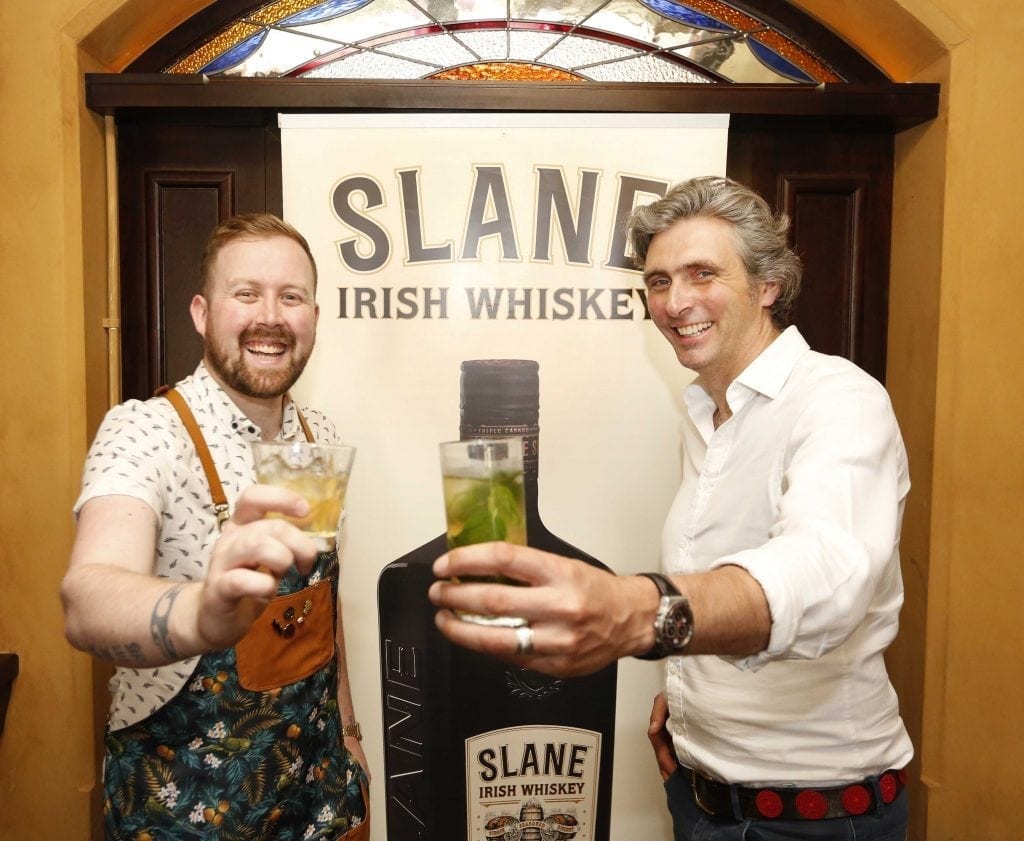 Series of free tasting events to discover a unique Irish whiskey distilled in the grounds of the legendary Slane Castle.

Slane Irish Whiskey has just announced a series of exclusive whiskey tastings throughout Ireland this summer. Slane Whiskey Distillery is located on the grounds of Slane Castle, Co. Meath in the heart of the historic Boyne River Valley, about 45 Kms North West of Dublin.

The Slane Whiskey Tasting Experience will visit a number of bars and venues across Ireland where Slane Whiskey’s Irish brand ambassador Will Lynch will present a masterclass showcasing the history and heritage of Slane Irish Whiskey. He will also teach tasting students about the unique creation process that takes place at the state of the art Slane Distillery.

To kick off the tour, Slane Whiskey hosted a specially curated pop up event in the Irish Whiskey Museum in Dublin last week to celebrate the history and heritage of Slane and share with guests the unique creation process used in producing Slane Irish Whiskey. 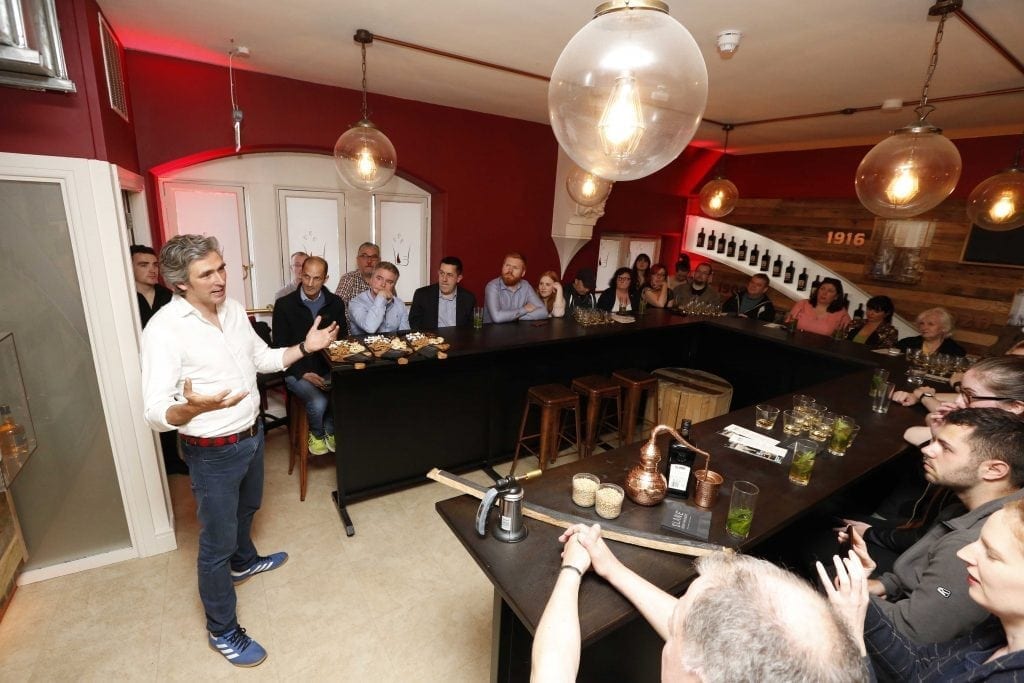 I was delighted to receive an invitation to the event where I caught up with Slane Whiskey Owner Alex Conynham and Slane Whiskey’s Irish Brand Ambassador Will Lynch.

Using some very innovative teaching props, Will took us on a journey to explain how Irish Whiskey is made in Slane from the harvesting of Barley on the Slane Castle Estate, through Malting, brewing, Distilling, Maturing and Blending.

Will continued the Slane Whiskey Tasting Experience with a whiskey tasting class,  a cocktail demonstration and a deconstruction of Slane whiskey’s unique flavour profile with a selection of food pairings.

Alex provided some very open and honest insights into the challenges of building a new whiskey brand and distillery, building on the commercial success of Slane Castle’ history as a Rock Concert Venue. The headline act in 1982, the second year of Slane concerts was The Rolling Stones who would return to play again in 2007.

A natural raconteur, his shared family memories of planning and organising these early rock concerts for bands like the Rolling Stones were fascinating.

Many of us thought that Slane 1982 might well have been a Rolling Stones farewell concert. In 1983, a growing rift between Jagger and Richards blocked their touring for 5 years with Jagger focusing more and more on solo projects including his 1995 trans-Atlantic pairing with David Bowie on Live Aid. In 1983 the band had been playing for twenty years and many thought that they were too old and too tired to keep touring.

In a piece of serendipity that could only happen in Ireland, on the night after the Slane Tasting event at the Irish Whiskey Museum, I was a guest at the Rolling Stones Concert in Dublin watching Mick Jagger(74), Keith Richards (74), Ronnie Woods (70) and Charlie Watts (76!) do what they do best.

As you can see from the concert video, after 56 years of touring, The Rolling Stones are far from past it. Just like good Irish Whiskey, they just get better and better with age!

Slane say that their Irish Whiskey is

“a smooth spirit of natural character with untamed notes of oak and spice from a signature triple casked blend of Irish Whiskeys”.

Bottled at 40% ABV, Slane Whiskey is created using Irish whiskeys drawn from a trio of casks – virgin oak casks, seasoned casks (which previously contained Tennessee whiskey and bourbon) and Oloroso Sherry casks. I looked forward to revisiting this whiskey for a second review.

The nose is warm and gentle. The first sip hints at complexity. These initial notes are sweetened with hints of caramel, vanilla and butterscotch. There is a subtle but definitely spicy finish across the front but not tip of the tongue. Normally Oloroso finished whiskey will have dried fruit and citrus tones. But here the sweetness is quite different. The nearest analogy I could think of is that of a rich chocolate truffle with orange fondant. Rich, warm and mellow sweetness with a hint of citrus.

I have found Slane whiskey to be a very smooth, approachable and easy drinking whiskey that can be enjoyed neat or with ice or mixers. My advice is to sip it neat at first before adding a few drops or small splash of water to really bring out and further develop the warm caramel and butterscotch tones.

Slane Whiskey is an ideal Irish whiskey for whiskey beginners to try as a first whiskey. Uniquely, it is warming in winter sipped neat or with a splash of water, but refreshing in summer with ice or in a cocktail.

A recommended retail price of just €33 here in Ireland also makes it a very affordable everyday whiskey for use without second thought with mixers or in cocktails as a party whiskey.

After the launch of Slane Whiskey last year, I awarded it a Two Pooka rating on the Pooka Irish Whiskey Scale. This was an unprecedented Pooka rating for an entry level blended everyday whiskey. Here’s what I wrote in my initial Slane Whiskey Review.

“I am quite sure that this seemingly entry level Irish blended whiskey is heading for a definite 2 Pooka award with a 3 Pooka award far from being out of the question. That would put it firmly in Yellow Spot, Redbreast 15 and Writers Tears territory. For a blended Single Malt – Single Grain Irish Whiskey at a RRP of just €33 to achieve this level of Pooka rating is an incredible achievement for a new whiskey brand’s first release.”

In my opinion, Slane whiskey is one of the most versatile Irish Whiskeys on the market today. It is one of a handful of “Swiss Army Knife” whiskey expressions that secure a permanent place in my own personal whiskey cabinet as a “whiskey for all occasions”.

To use a fashion analogy, it’s like a “Little Black Dress” or a Classic Blazer. It’s a go anywhere, any place, any time whiskey that can be served with confidence; neat to your aficionado friends or with mixers or in cocktails at a house party, without breaking the bank.

If faced with a supermarket choice of buying a bottle Jameson or Slane for everyday use, for a few euros extra, I’d buy a bottle of Slane every time.

Slane Irish Whiskey is available in Ireland for €33 RRP (700ml) through O’Briens Off Licences or from Whiskey Sales.com

The Slane Whiskey Tasting Experience will visit venues nationwide with more dates to be announced throughout the summer.  Co-Founder Alex Conyngham will join Will for a select number of events during the series of tastings.

Tickets are free but limited to around 30 places per event, so book early to avoid disappointment. Check out Eventbrite.ie for to see a full list of dates and venues and to reserve your place.

Slane Irish Whiskey Distillery and visitor experience centre, located on the grounds of the legendary Slane Castle, is now open and invites the public to learn more about the stories behind the whiskey and unique creation process.

More dates to be announced. Check out Eventbrite for more details.

To learn more about the history of Slane Castle and Distillery, visit:

Stuart McNamara is an International Whisk(e)y Writer and Travel and Food Blogger.

Stuart is Editor-in-Chief of Irish Whiskey.Com , the Irish Whiskey Trail , WhiskeyWriter.com HaigWhisky.com and  WhiskeySales.com. In his native Ireland, Stuart is a Judge in the Irish Quality Food Awards. Follow Stuart’s Personal Tweets about Irish Whiskey, Irish Food and Travel @IrelandandIrish and about International Whiskey  in general at @Whiskey_Writer.