It is hard to believe that it has been just a year since the opening of the Pearse Lyons “Church” Distillery in Dublin’s Liberties.

Last week I was delighted to be invited to the 1st Birthday celebrations which also marked the launch of Ireland’s first 5 year old whiskey in over 25 years. Pearse 5 Year Old Irish Whiskey is also the first whiskey to be fully distilled and matured by Pearse Whiskey using their own copper pot stills. 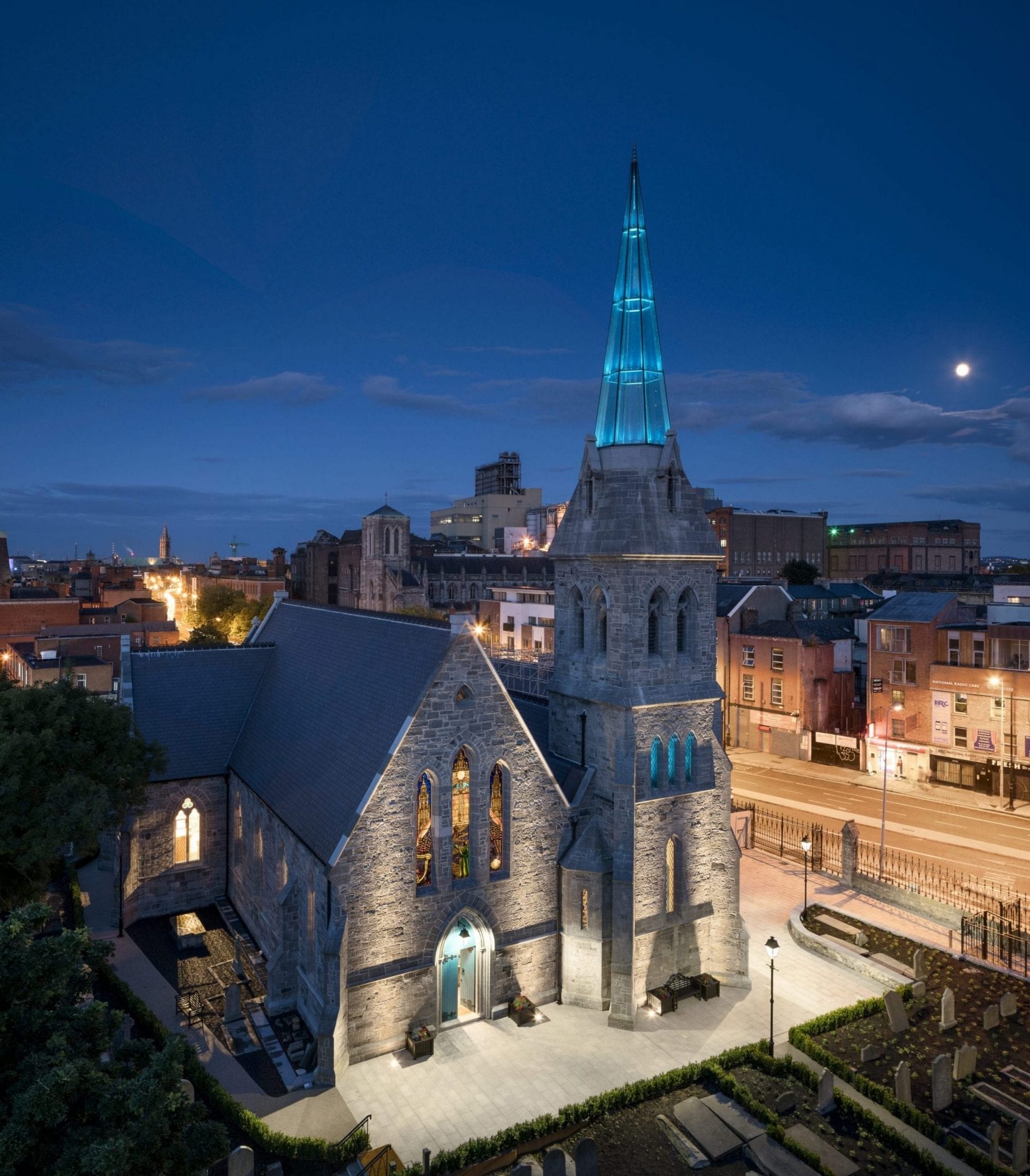 Dr. Pearse Lyons was an Irish born scientist, brewer and distiller who started his career after university working for Irish Distillers and Guinness. A PhD focused on Yeast led to a move to the United States. Shortly after moving, he went on to found his own company Alltech in Kentucky. 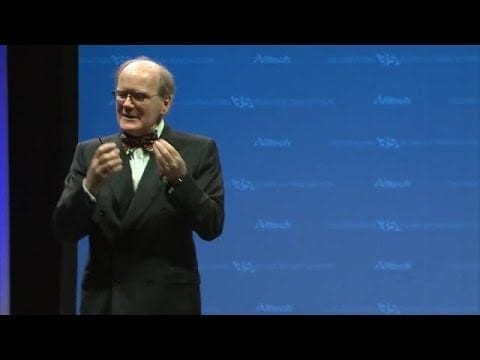 In recent years, Dr. Lyons had a dream to open a distillery of his own in Dublin. Together, with his wife Deirdre, he purchased and renovated an old lightning damaged and deconsecrated church in Dublin’s historic “Liberties” area. Coincidentally, this was the area where Dr. Lyons’ grandparents originally came from. It came as a pleasant surprise to Pearse when he discovered that the church and churchyard he now owned and was restoring was also the graveyard where his grandparents and other relatives were buried. 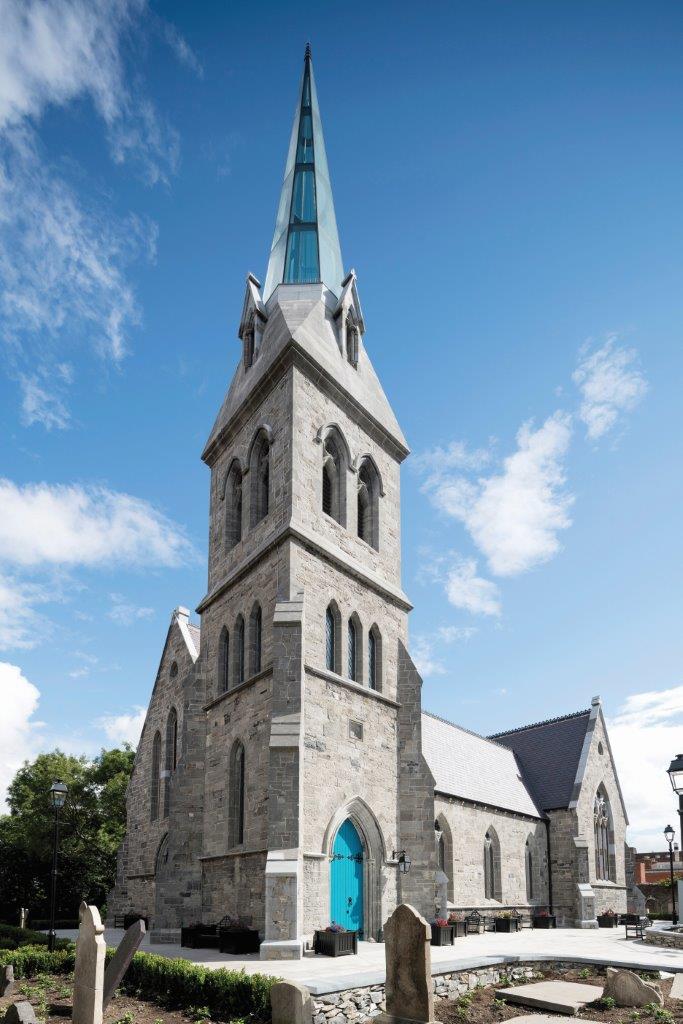 Deirdre Lyons who is Head of Corporate Image and Design at Alltech, took the lead in redesigning the interior of the church. In doing so, she carefully retained and showcased the very best of the original architecture, but through a new whiskey distillery lens. Her end result is a true master piece of interior design. Vibrant colours, stained glass and natural lighting  are tastefully complemented by a deeply empathetic and respect for the building’s heritage and past.

The church spire which had been removed for safety reasons in the 1950’s after the church was damaged by lightning has now been replaced by a new  spire made out of steel and glass and lit from inside to create a glowing blue beacon in the midst of Dublin’s Liberties.

The harmonization of style between the ecclesiastical and distilling worlds have been beautifully executed particularly though the specially commissioned stained glass windows which pay homage to the various stages of the whiskey making process. Special attention is given to the art of Cooperage

Dr. Pearse Lyons’ ancestors on his mother’s side, the Dunnes, were skilled in this craft for generations. Indeed, one family member, Margaret Dunne, is recorded as the first female cooper in Ireland. 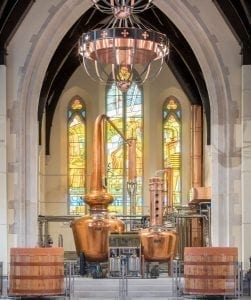 Unfortunately, I was was working outside the country when the new distillery opened a year ago and missed the opening party. When I say party, I should say “parties” as I understand that there may have been more than one or five! I am reliably informed that leading the charge at all these celebrations was Dr. Pearse Lyons himself, delighted and proud of the achievement of a lifetime dream and also of the superb execution of the project in both style and delivery.

It was so sad then, that shortly after the opening of the Pearse Lyons Distillery, that Pearse passed away unexpectedly after a short illness.

I never met Pearse, but I would really have loved to. On my own return to Ireland shortly after the opening, I visited the new distillery and saw him speak on the short “video welcome” to visitors. There was something in the way he spoke that intrigued me. The more research that I conducted about the man, the more I would have liked to have arranged an interview with him for here, or on my podcast. I was working on setting up something with his team, when sadly we received news of his passing last March.

While I would never have the honour of meeting him, what shone through to me from his various interviews was that above all, he seemed like a most kind, vivacious and decent man. In a note I wrote at the time to an old friend from the Irish Alltech team, I said that I had  a real and profound sense of shock at Pearse’s passing and that I also had  a real sense of Pearse Lyons being one of life’s really special people.

The more I saw of Pearse’s media interviews, the more I admired him as a person, a visionary communicator and a leader.

Late last year I brought some Austrian whiskey journalist colleagues to PLD. They were wowed by the Pearse Lyons Distillery tour and experience, but what they talked about most afterwards was the video of Pearse shown at the start of each distillery tour in which his passion, his enthusiasm, his integrity, his sense of wonder and his vision all shine through.

The more I had researched Pearse through his interviews and writings, the more I looked forward to meeting him in person at some stage. Sadly, it was not to be.

I sensed the same sense of vision, passion and altruism in his wife Deirdre, none more so than in her interview about her role in designing the new distillery which was shown coincidentally on RTE Irish televison a few days before Dr. Lyon’s untimely passing.

I have no doubt that this whole Pearse Lyons Distillery project was first and foremost altruistic in nature. I also have no doubt that a project built on such solid and caring foundations will also succeed commercially. It seems to me that together, they partnered Science and Art with their shared sense of Humanity and Fun to do really great and nice things together. Most of all, I am so glad that Pearse Lyons saw the Pearse Lyons Distillery project achieve success, respect and recognition before he died.

I think with deep respect of Pearse and his wife Deirdre every time I pass by or drop in.

To get a sense of the power and vision of Pearse  Lyons as a visionary and communicator, have a look at this short video of him explaining about “doing what makes your heart sing”.

Knowing how long it would take to run a complex construction and renovation project in the heart of Dublin city, the Pearse Lyons Distillery Team had the foresight to install their distillation plant in a Carlow based micro brewery five years ago. This meant that they had at least three years of distillation before disassembling the temporary distillery in Carlow and re commissioning it in the present church distillery two years ago. 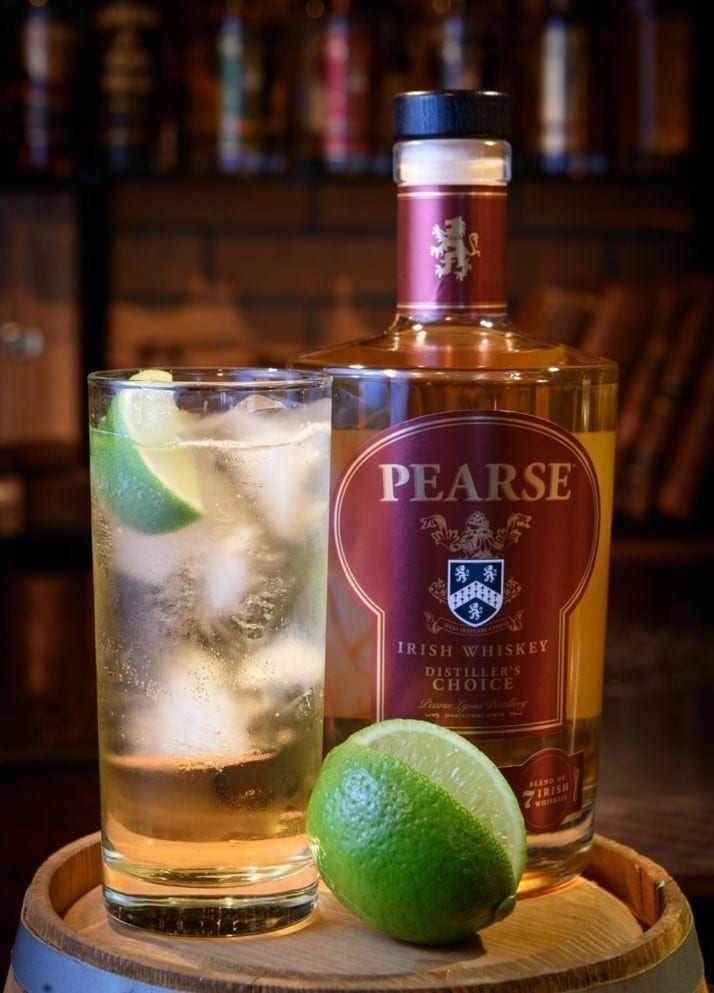 And it is this very first single malt spirit, distilled five years ago in Carlow by then Master Distiller Jack O’Shea using the Vendome copper pot stills we see today in Dublin, that has now been matured for those five years in Bourbon Casks and bottled at 46% ABV as the Pearse 5 Year Old Single Malt Irish Whiskey.

It is also the first five year old Irish Whiskey to be released by a new distillery, anywhere in Ireland for more than 25 years.

The bottle design has been inspired by the Lyons family distilling heritage and the Church of St. James, now the home of the new Pearse Lyons Distillery.

Six copper rings on the bottle t-stopper pay homage to the six generations of coopers in the Lyons family.

The colour scheme reflects the two Vendome Copper Stills, Mighty Molly and Little Lizzie commissioned from Vendome Copper Works near Alltech’s home base in Kentucky and which were transported to Ireland in 2011. These copper post stills, unique to Ireland, are credited with giving the new Pearse Whiskey its unique flavour profile.

The centre piece of the box label now features an inverse plan view of the octagonal spire as seen when looking up from inside the distillery.

Nose: A distinct but subtle Malt nose with quite pronounced vanilla oak.

Taste: Warm malty bite. Lightly poached cooking apple with cloves tempered with solid vanilla undertones. Quite smooth and very pleasant. The Malt stands out from other Irish Single Malts. A sign of a signature Pearse Whiskey Flavour from the Vendome Copper Stills imported from Kentucky??

Finish: Quite long and warm.

Catching up with old Whiskey Friends

One of the nice things about attending whiskey launch parties such as this is that it brings all of us whiskey bloggers and  commentators together in the real rather than virtual world.

Having been working abroad and away from Ireland for much of the last two years, it was great to catch up with so many old friends from the Irish whiskey world and make the acquaintance in person of many who up until now, I have only known and spoken to online.

I was also delighted to meet the Irish Whiskey team from SuperValu who are one of Ireland’s leading Supermarket chains. Up to recently, if you wanted to buy an unusual or premium Irish whiskey other than the mainstream brands of Jameson, Powers or Tullamore DEW etc., you had to go to a specialist whiskey shop in Dublin or another major city or wait until you were passing through one of the major Irish airports.

In the last 3 years, SuperValu have introduced a premium Irish Whiskey and Spirits corner in over 200 of their stores throughout Ireland.  Not alone has this made Irish premium Irish whiskey available and accessible to Irish consumers, but it has also made it accessible to tourists visiting Ireland who can now try and buy premium Irish Whiskey while on their vacation in Ireland, instead of having to wait to buy it untried and untasted while passing though Dublin airport on their way home.

Guests at the Pearse 5 Year Old Launch were intrigued by what appeared to be a brass Spirit Safe in the centre of the Distillery. This was the  Pearse Whiskey “Vaporiser”!

Press the button and whiskey from a bottle of Pearse 5 Year Old is vaporised and propelled towards your nose. It’s a great idea and great fun. Keep an eye out for the vaporiser in Dublin Airport and at future Pearse Whiskey tasting events.

It has been a busy and successful  first year for Pearse Lyons Distillery and Pearse Whiskey, albeit a year tinged with sadness.

As I wrote earlier I have no doubt that both brands will continue to be hugely successful. From chatting to Master Distiller Gearóid Cahill, and Global Brand Ambassador Conor Ryan, there are exciting new expressions to come to build further on the unique taste profile of the Pearse 5 Year Old Single Malt.

The Pearse Lyons Distillery tour is in my opinion the very best whiskey tourism experience available in Dublin. It is where I bring my own guests and fellow whiskey bloggers from abroad when they visit me in Ireland.

I’d like to thank the Pearse Whiskey and Pearse Lyons Distillery teams for inviting me to their 1st Anniversary celebration. Special thanks to Distillery Manager, Tracey Flinter, Master Distiller, Dr Gearóid Cahill, Master Distiller Emeritus Jack O’Shea, Pearse Whiskey Global Brand Ambassador Conor Ryan, Distillery Tour Manager Andrew Adamson and all of the PLD Team that I have enjoyed meeting with over the last year.

Special thanks also to Gemma and Katie from Gemma Smyth Communications who are a dream to work with for whiskey bloggers such as myself and many others.