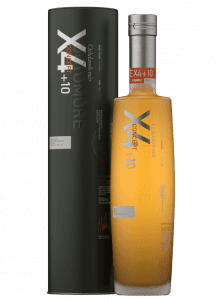 Who was the very first Whiskey Blogger or Whisky Writer?

It certainly wasn’t me, nor was it even the great Jim Murray.

There is a good case to be made for Mr. Martin Martin from the Isle of Skye in the Inner Hebrides who gave one of the first recorded literary reviews of a whisky.

Writing in his book A Description of the Western Islands of Scotland  in 1695 (London:1703) about the Hebridean Isle of Lewis he said:

“The air is temperately cold and moist and as a crorrective, the natives use a dose of Trestarig or Usquebaugh.”

“Their plenty of Corn was such, as dispos’d the Natives to brew several sorts of Liquors, as common

which is strong and hot; a third sort is four times distill’d, and this by the Natives is call’d Usquebaugh-baul, id est Usquebaugh, which at first taste affects all the Members of the Body: two spoonfuls of this last Liquor is a sufficient Dose; and if any Man exceed this, it would presently stop his Breath, and endanger his Life. The Trestarig and Usquebaugh-baul, are both made of Oats.”

So much for the oft vaunted premise that all Scotch is double distilled. In recent weeks I have covered the Auchentoshan Distillery near Glasgow City and their Triple Distilled Single Malt Scotch Whisky. According to Martin, not only was triple distillation once the norm in the Hebrides (Trestarig, id est Aquavitae), but there was also a quadruple distilled liquid Usquebaugh-baul (Perilous Whisky) of about 90% ABV for the more courageous or even reckless Brave Hearts of the Scottish whisky populace. Martin, in this honest and open early whisky review, cautioned his readers that…

“The first taste affects all the members of the body. Two spoonfuls of this liquor is a sufficient dose; and if any man should exceed this, it would presently stop his breath and endanger his life.”

Perilous Whisky indeed. He should probably have also advised a drop or two of water to open it up a wee bit before sipping.

Bruichladdich Distillery on the South West of Islay produces three brands of Whisky.

Port Charlotte Whisky is a heavily peated Single Malt with a strong emphasis on local provenance.

In 2007, Jim McEwan the Head Distiller at Bruichladdich Distillery in Islay took a double-distilled and super-peated malt spirit and ran it through the tall spirit stills of Bruichladdich twice more to reach an eye-watering quadruple distilled center cut of 89% ABV. 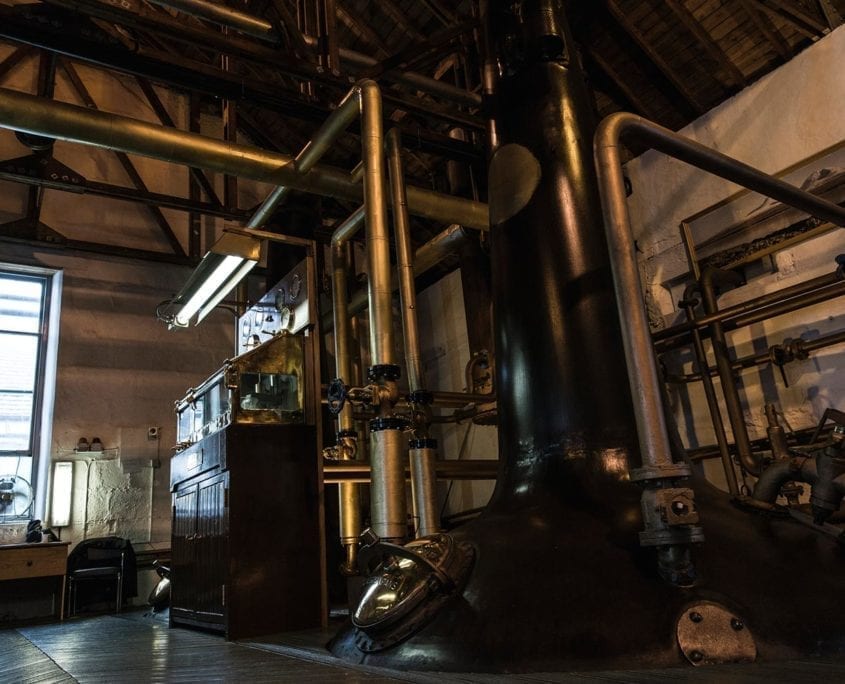 Legend has it that just three men were present in the still room for those historic and potentially “perilous” runs. The second man with Jim at that historic distillation run was today’s Head Distiller Alan Hannet and the third man apparently was on standby with the fire extinguisher.

Luckily, all ended well with no fire, explosions, blindness or heart attacks. Just Octomore X4, a quadruple distilled spirit peated to 162 ppm @ 89% ABVwith a strength and purity that had not perhaps been seen since the writings of Martin Marin back in 1695.

Seven years later, Octomore “Discovery” was released in a limited edition of 1695 bottles at 69.5% ABV for the Feis Ile Whisky Festival in Islay in 2014. 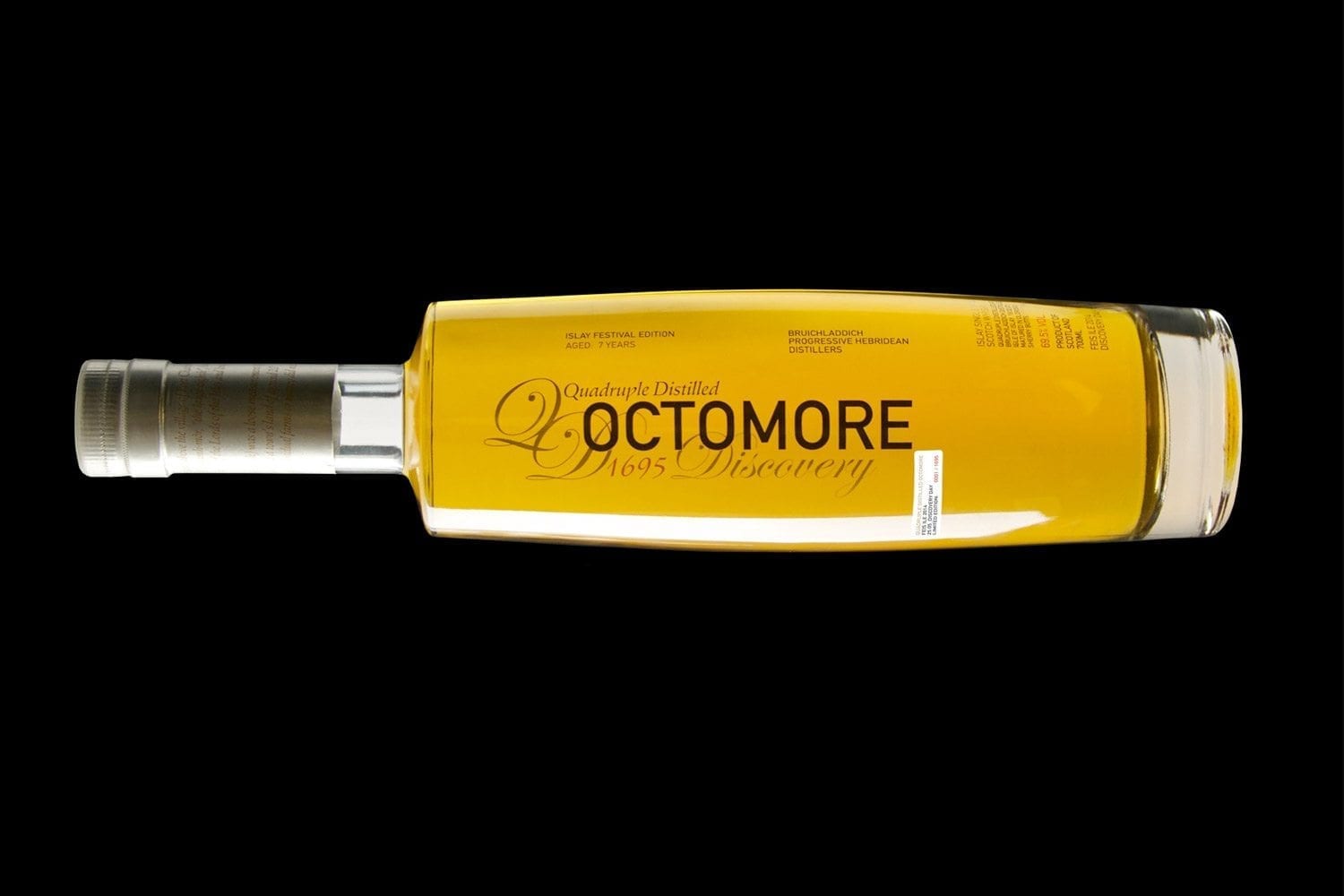 An earlier Octamore X4+3 at 63.5% ABV had been released when the whisky came of legal age and this had been preceded two years earlier in 2008 with a “teaser” “White Dog” or unaged spirit release. This X4 release was spirit straight from the still (no casking) but diluted and bottled down to a safe and sensible 50% ABV. 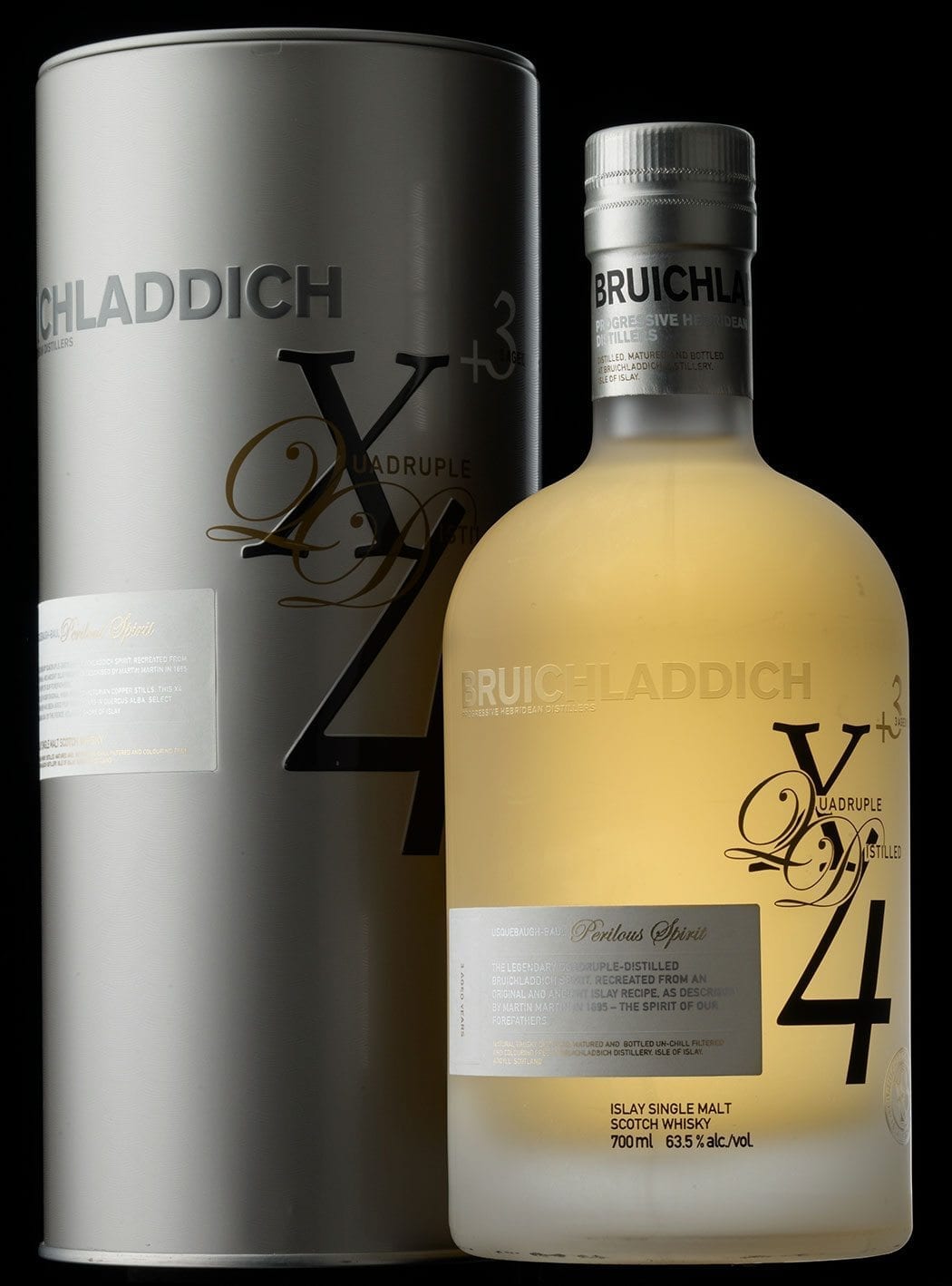 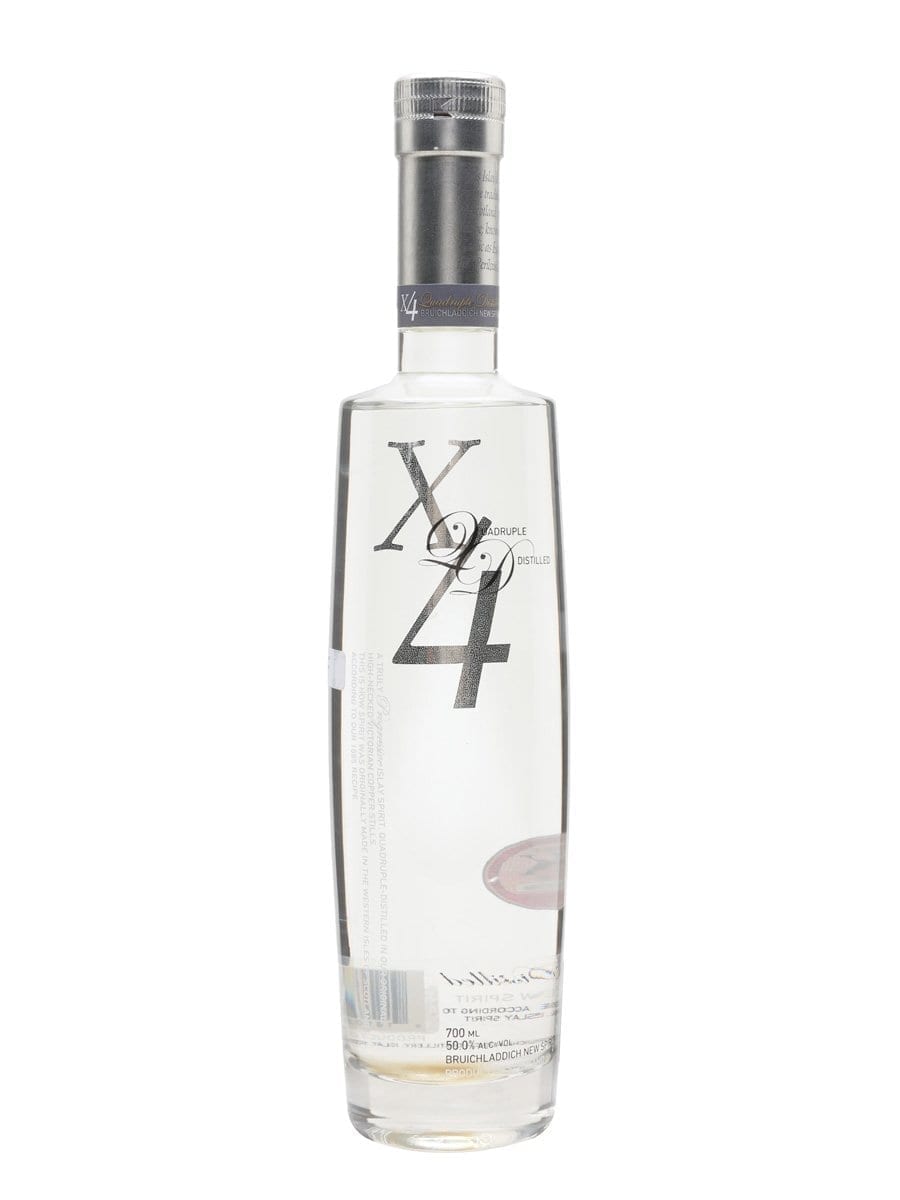 So now, some 10 years later, we have the latest release of the X4 Distillation with a Limited Release of just 3,000 bottles. There is a purchase limit of two bottles per customer and it is only available to buy at Brucihladdich.com.

This time the designation is X4 +10 as the spirit has been matured for + or over 10 years. 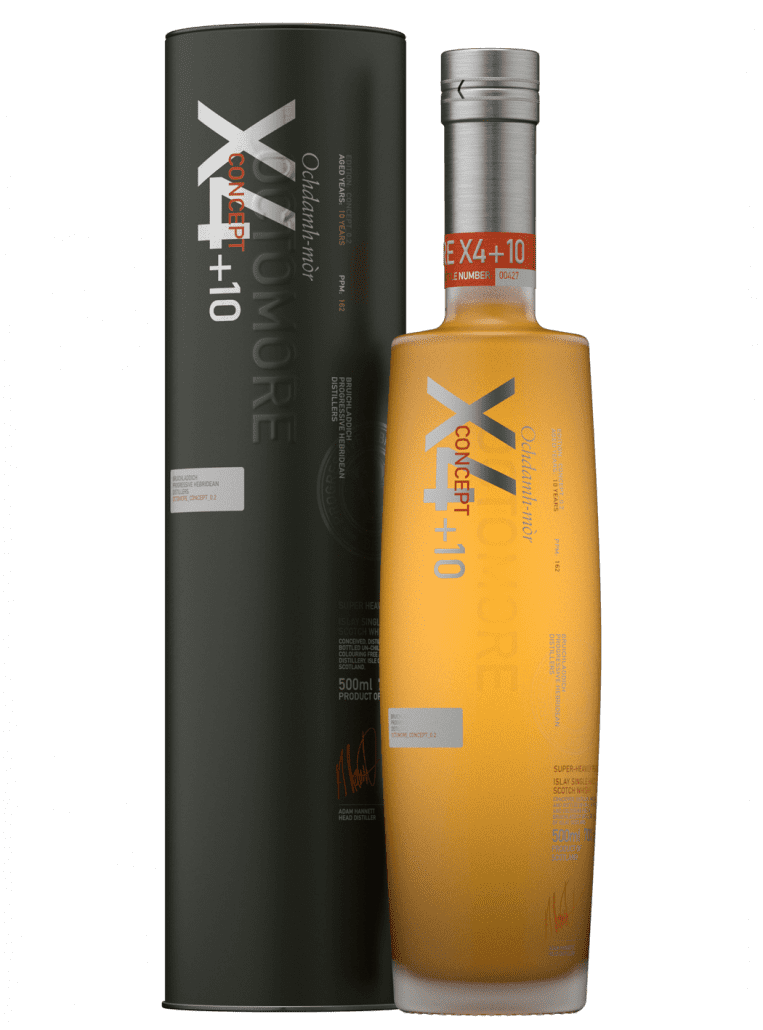 A Little about Sherry Cask and Wine Cask Maturation of Whisky

Rivesaltes Vin Doux Naturel wines are generally associated with the Languedoc-Roussillon area of France, where the grapes necessary to make the wine are grown.

Rivesaltes is an Appellation d’Origine Contrôlée for naturally sweet wines (Vin Doux Naturel) which are fortified before end of fermentation, normally with a little brandy.

Vin doux naturel are wines that have an innate or natural sweetness both from residual sugars from natural fermentation which is stopped mid-fermentation by “Mutage”.

Mutage is where high strength alcohol spirit, normally brandy at over 95 % ABV, is added to the wine before the end of the fermentation process. This kills the natural fermentation process before all of the natural sugars have fermented to alcohol, leaving a sweeter wine, fortified to a higher strength than normal by the brandy. The wine is then left to “mature” and oxidise outside in 20 to 50-liter glass demi-johns before finally being aged in casks from 5 to 40 years.

The end result is a complex and mature dessert wine at a strength of around 16% ABV. It’s one of my favourite alternatives to a Tawny Port, especially with a good strong Blue Cheese. It also lasts surprisingly well once opened.

While I’m on the subject of Mutage and fortification, I am often asked by Whiskey folks, why Oloroso Sherry Casks are so popular in Whiskey maturation in Scotland and Ireland. With other sherries, the residual yeast creates a sealing air-tight scum or “Flor” on both the liquid surface and the inner surface of the wine cask during fermentation and cask aging. This protects the young wines from contamination by stray wild yeasts. The Flor coating on the inside cask walls also blocks or hinders oxidisation by air, breathing through the wood.

With Oloroso, the fortification of the young wines with brandy or other strong spirits earlier on in the fermentation process limits the growth of the Flor coating, especially on the inner cask walls. This allows the cask to breathe much more freely than other sherry casks types and also permits oxidisation of the sherry and deeper penetration and soaking of the sherry into the cask wood. The end result is a sherry that can last several months after being corked and a cask which can yield richer, deeper flavors and colours to any whiskey matured or finished in it later in life. It’s also one of the reasons that sherried finished whiskies are generally darker in colour.

But back to the Whisky!

A 70% ABV, quadruple distilled, super-peated single malt whiskey with a slightly sweet, triple cask finish to tame the “Perilous” Whisky within. 3,000 bottles limited to 2 per customer. I made a mental note to buy one for myself on the day of the launch. But it was not to be.

Unfortunately, there appeared to be some problems on the Bruichladdich website after they opened up their online sales channel for Octamore X4+10 on 25 November. When I checked back on the next day, they would appear to have sold all 3,000 bottles.

So, for now, I’ll have to leave you with just the Official Tasting Notes. If I do manage to track down a sample to taste in person in the coming weeks, I’ll update this article with my own notes on this quite unique and historic Islay Whisky.

Airy and light, banana milkshake, vanilla and tobacco leaf, light praline and coconut. Lemon and grapefruit zest with geranium. With a drop of water, hints of sultana and barley flour come through, then melon and pear with marzipan. Just a whisper of char and even less peat smoke.

A delicate texture at 70% and a warming sensation crosses the palate, a gentle chilli pepper heat. A hint of char from the wood and resinous sweetness, lemon and honey, and a hint of cloves. A splash of water calms the heat and opens the fruit, mango, melon and marzipan. Tablet, syrup, and vanilla, and, again, the barley flour with ground ginger come through after opening.

On the finish, there is a little aniseed, a gentle dryness and just the idea of peat smoke. A dry, almost smoked, coconut note fades into a dark fruit, raisin tone. At the very end comes peat smoke, just a little but as ever the power of the Octomore smoke even after four distillations and 10 years cannot be tamed.