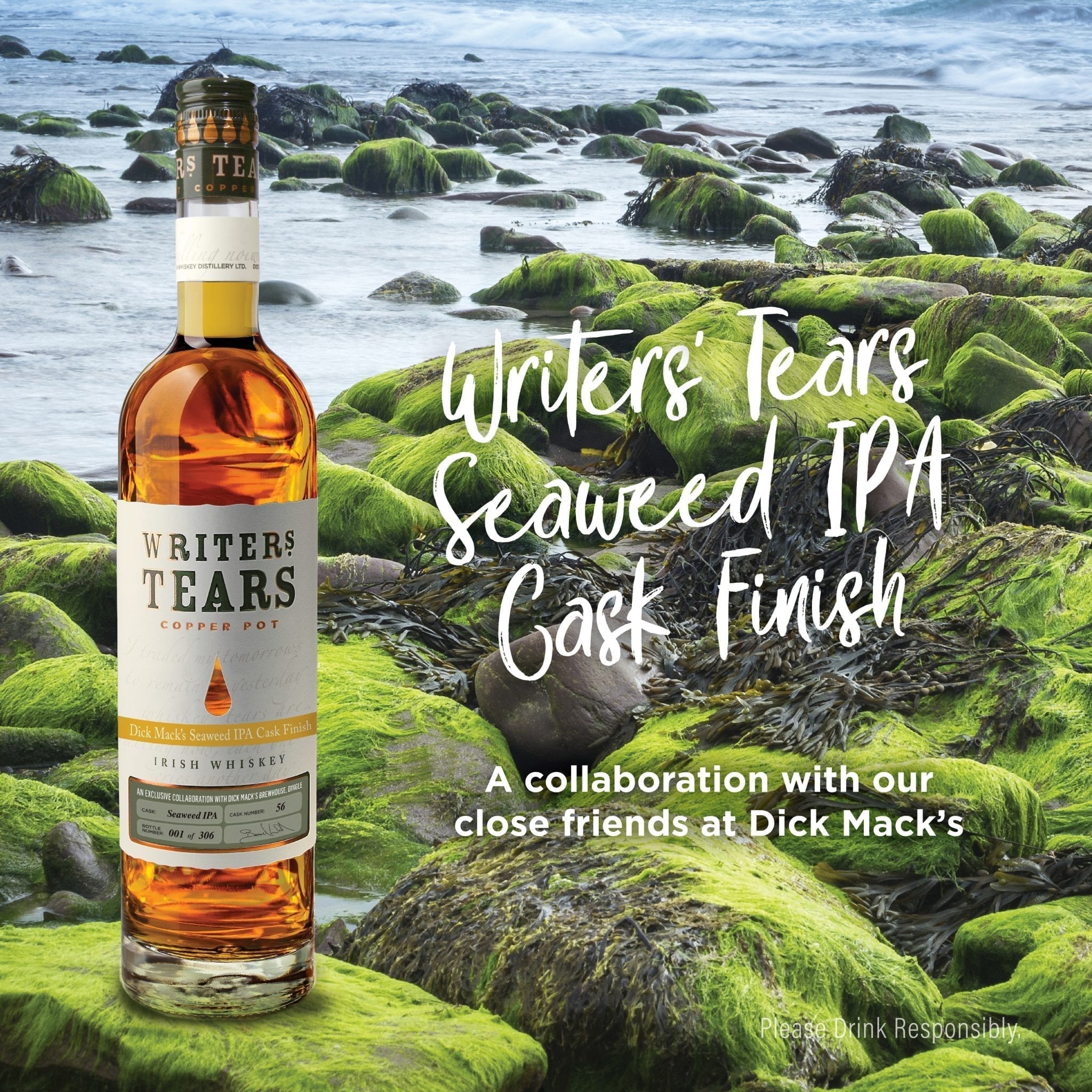 Carlow & Dingle, Ireland – 15th May 2020: Walsh Whiskey has released the second in a series of collaborative experiments with the legendary Dick Mack’s Pub & Brewhouse in the seaside town of Dingle in County Kerry, Ireland. Writers’ Tears – Seaweed IPA Cask Finish is a truly exceptional creation that brings together an old Irish whiskey recipe of Single Pot Still and Single Malt whiskeys, finished in a unique cask infused with the flavour of an 8% IPA beer laced with a seaweed harvest from the nearby Atlantic Ocean.

“This time around we wanted to capture the unique flavours and influence of the harvested kelp seaweed, lashings of which were used in the creation of Dick Mac’s Seaweed IPA…..”

“Dick Mack’s are known for their bold and innovative approaches to beer brewing and championing of Irish whiskey, as well as their legendary hospitality, so we knew this collaboration was a perfect match.”

“We were delighted with the response to our first collaboration with Walsh Whiskey and jumped at the chance to work on another really unique expression together. Our Seaweed IPA brings the influence of the wild Atlantic Ocean to life and has created something special with Writers’ Tears, which we are proud to have been a part of.”

Bernard Walsh started this ‘spiritual’ adventure in 2018, when Finn mentioned Dick Mack’s newest creation – a Seaweed IPA. A barrel used in the creation of several batches of Dick Mack’s Tóg Bog É Seaweed IPA was sent on the 298 kms/185 miles cross-country from Dingle in County Kerry to Walsh Whiskey in County Carlow. Tóg Bog É (pronounced Toag Guh Bug Ay) is a Gaelic expression meaning ‘Take it Easy’ which has come to identify Irish people’s traditional outlook towards how best to live life.

On Saint Valentine’s Day 2019 the barrel was filled with the award-winning Writers’ Tears – Copper Pot, triple-distilled, premium blend of Single Pot Still and Single Malt whiskeys and laid down for 14 months to finish. It was bottled naturally, non-chill filtered, at high strength. 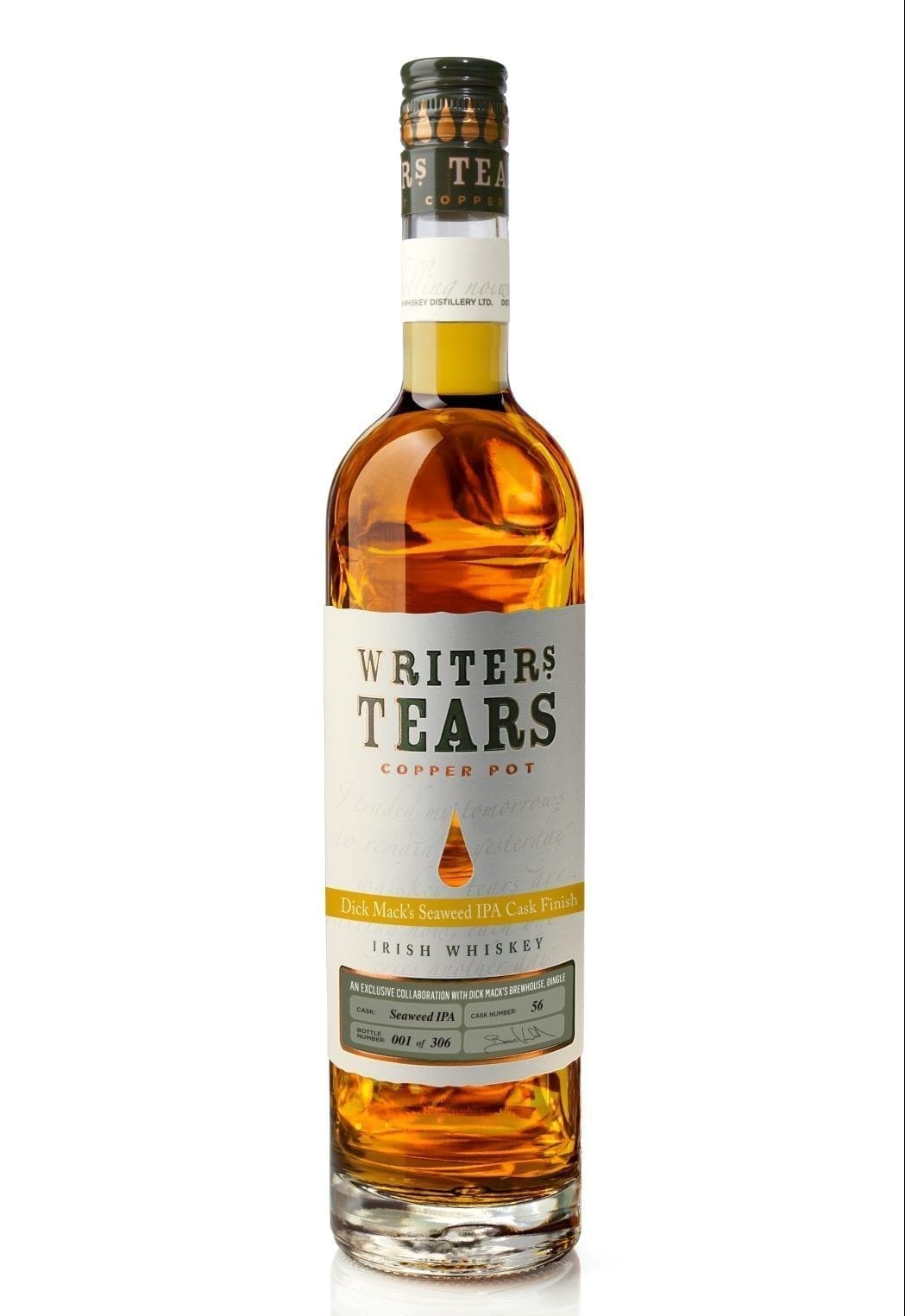 The single cask (numbered ‘Batch 56’) has now yielded 306, individually numbered, bottles of Cask Strength (56.3%) super-premium whiskey. The Recommended Retail Price of this unique expression is €82/ US$89/ £72, however many bottles have already been snapped up by members of The Irish Whiskey Society and frontline workers of the Dublin Fire Brigade Whiskey Club. This unique expression is already a collector’s item.

The whiskey holds a colour of golden mustard and flavours of autumnal bramble apple, wrapped in a fragrant butterscotch, opening up to salted fruit syrup and liquorice on the palate. A creamy mouthfeel ascends, as though on the crest of a wave, lapping up gently with a dry earthiness.

Note re Webcast about Writers’ Tears – Seaweed IPA Cask Finish on 27th May:

Established in 1999 by husband and wife, Bernard and Rosemary Walsh, Walsh Whiskey is a leading producer of premium and super-premium, triple-distilled, craft, Irish whiskeys – Writers’ Tears and The Irishman. Demand for these critically acclaimed whiskeys currently exceeds available supply in the 50 countries they are distributed to worldwide.

Three friends Aussie, Seamus and Dick Mack’s great-grandson, Finn, discuss times past in the snug at Dick Mack’s over a few pints. The discussion turns to Dick Mack’s history of bottling its own beer and a dream is born. Two years later, after months and months of research, planning and hard work, Dick Mack’s Brewhouse is born. Located in a 250 year old cow shed, the brewhouse has since picked up Gold medal awards for its Coffee Stout and Session IPA at the Blás na hÉireann awards.