Just a quick “Heads Up” that there is now less than two weeks to go to International Irish Whiskey Day ™ on Wednesday 3rd March or 3/3. 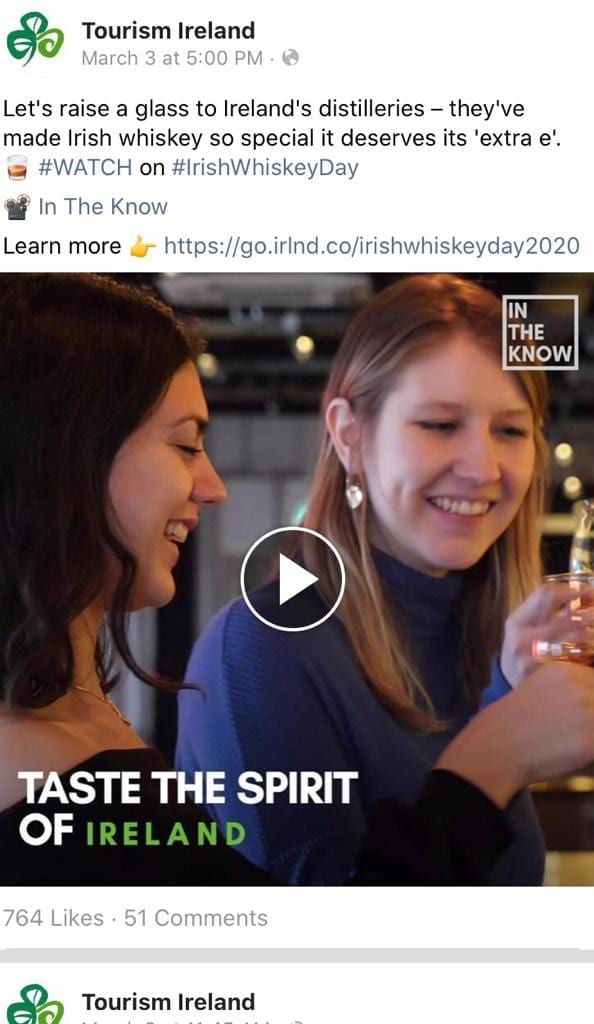 Much of this incredible viral success on social media was due to support from major Irish related social media accounts such as Tourism Ireland, the National Irish Tourist Board and major Irish Whiskey Industry players such as Pernod Ricard.

An unsolicited article about Irish Whiskey Day on the major Irish Media Channel The Irish Post, based in the UK, was shared nearly 100,000 times on Social Media. This article which came as a very unexpected surprise managed to summarise what #IrishWhiskeyDay is all about far better than we could. The idea behind Irish Whiskey Day when I created it in 2016, was to celebrate the significance of the number 3 in Irish Whiskey.

An added bonus is that 3rd March or 3/3 is exactly two weeks to the day before St Patrick’s Day, so International Irish Whiskey Day is an ideal opportunity to educate fans of all things Irish about the wonders of Irish Whiskey in time to share their new found knowledge and appreciation with their friends and colleagues on 17 March. 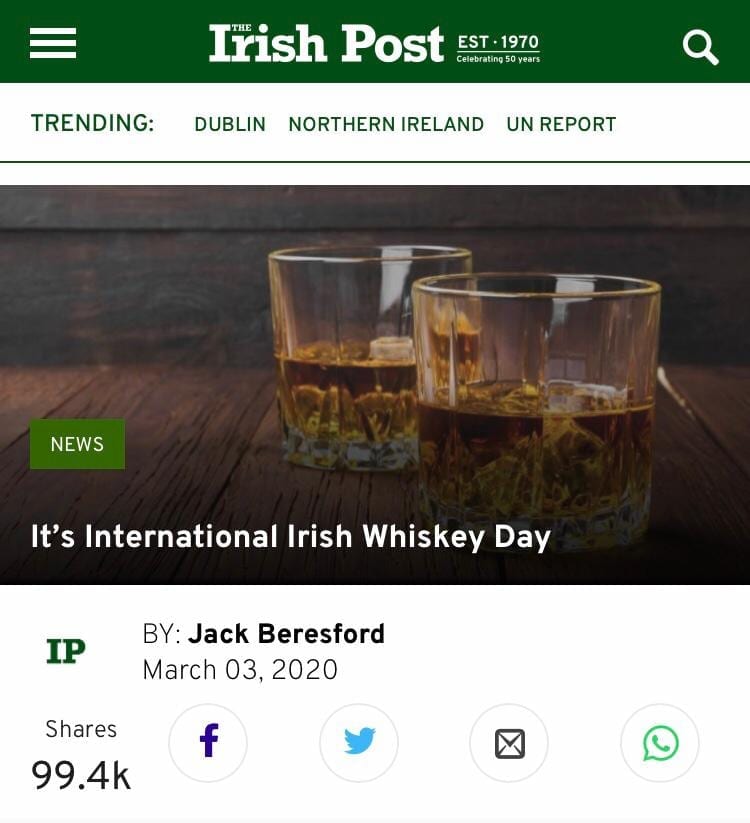 One of the fun things that we noticed last year is the #IrishWhiskeyDay is actually some 47 hours long. The day officially begins in New Zealand at 11 am on 2nd March Dublin time and concludes 47 hours later as the Irish Whiskey sun sinks beneath the Pacific at midnight in Honolulu or 10 am Irish time!!

Our very first social media post last year was courtesy of Tourism Ireland in New Zealand and our last post to close #IrishWhiskeyDay 2020 was from an Irish Whiskey Fan in Honolulu 47 hours after the day began in New Zealand.

I came up with the idea of Irish Whiskey Day in 2016 while I was living and working abroad. It struck me that unlike Scotch which has World Whisky Day, there was no actual day dedicated just to Irish Whiskey. But what day to pick to do proper justice to Irish Whiskey??

The numbers 3 and 9 have always been fun element of my life. My own birthday is in March. I was born in 63. I’ve had several cars and boats with 999 in the registration. I even had three 9s in my number as in number rank and names when I served as a military officer. My cell phone number ends in 111222 I’ve lived abroad in several number 9s.. I could go on but it would only confirm my dottiness. The day was obvious either 3rd March (3/3) or 9th September (9/9). But it was an easy decision 3rd March or 3/3 for our American readers is always exactly two weeks to the day before St Patrick’s Day which falls on 17 March each year. An ideal opportunity to refresh peoples memories and knowledge two weeks before the really big International Irish Day.

3 years of maturation to be legally called Irish Whiskey

Of course there are many other Irish links with 3 including the three leafed Shamrock, Ireland’s most famous symbol and the three colours (Green, White and Orange) of the Irish Tricolour under which I was proud to serve under as an Irish Soldier for over 30 years all around the world.

I mentioned above in the original draft of this article just after Irish whiskey day in 2020, that the online annual event using the #Irish Whiskey day and #InternationalIrishWhiskeyDay had achieved a Social Media Reach of over 8 Million. This years event on March 3 2021 had a verified Social Media Reach of over 20 Million. I think my crazy little idea may be here to stay. In two days time it is 3rd October, so eactly five months to go to International Irish Whiskey day 2022.

If your brand would like to collaborate with Irish WhiskeyDay.com 2022, give me a shout at any time.