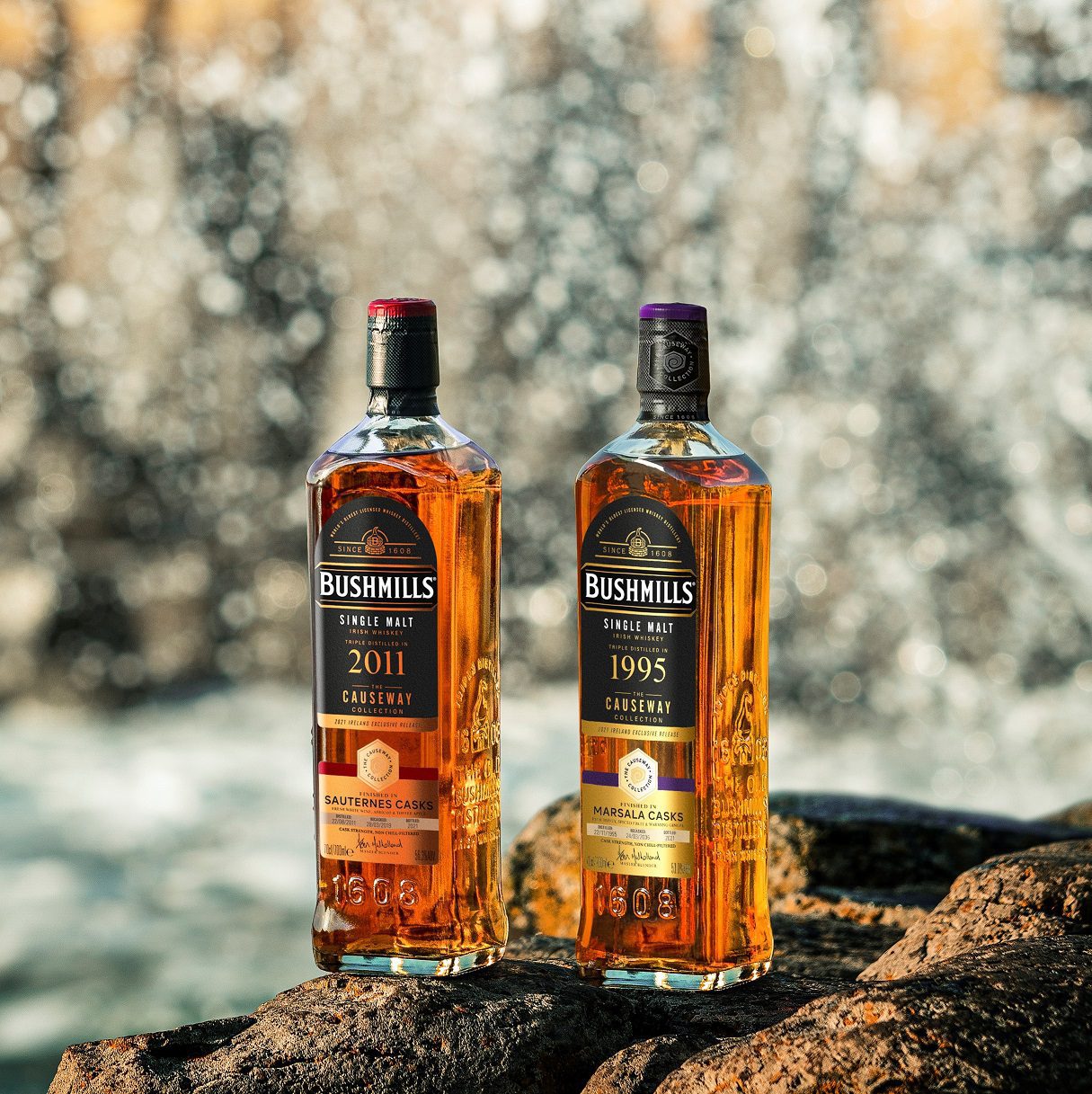 This year’s collection features twelve new releases to be launched worldwide across 8 markets, and includes two bottlings exclusively released for the island of Ireland, the 2011 Sauternes Cask, a first for Bushmills Irish Whiskey, and a 1995 Marsala Cask aged in rare Marsala casks for an unprecedented 15 years.

I was delighted to attend a bespoke online launch event this afternoon hosted by Bushmills Master Distiller Colum Egan and Bushmills Brand Ambassador Lauren McMullan to taste both newly released, but quite “old” whiskeys. 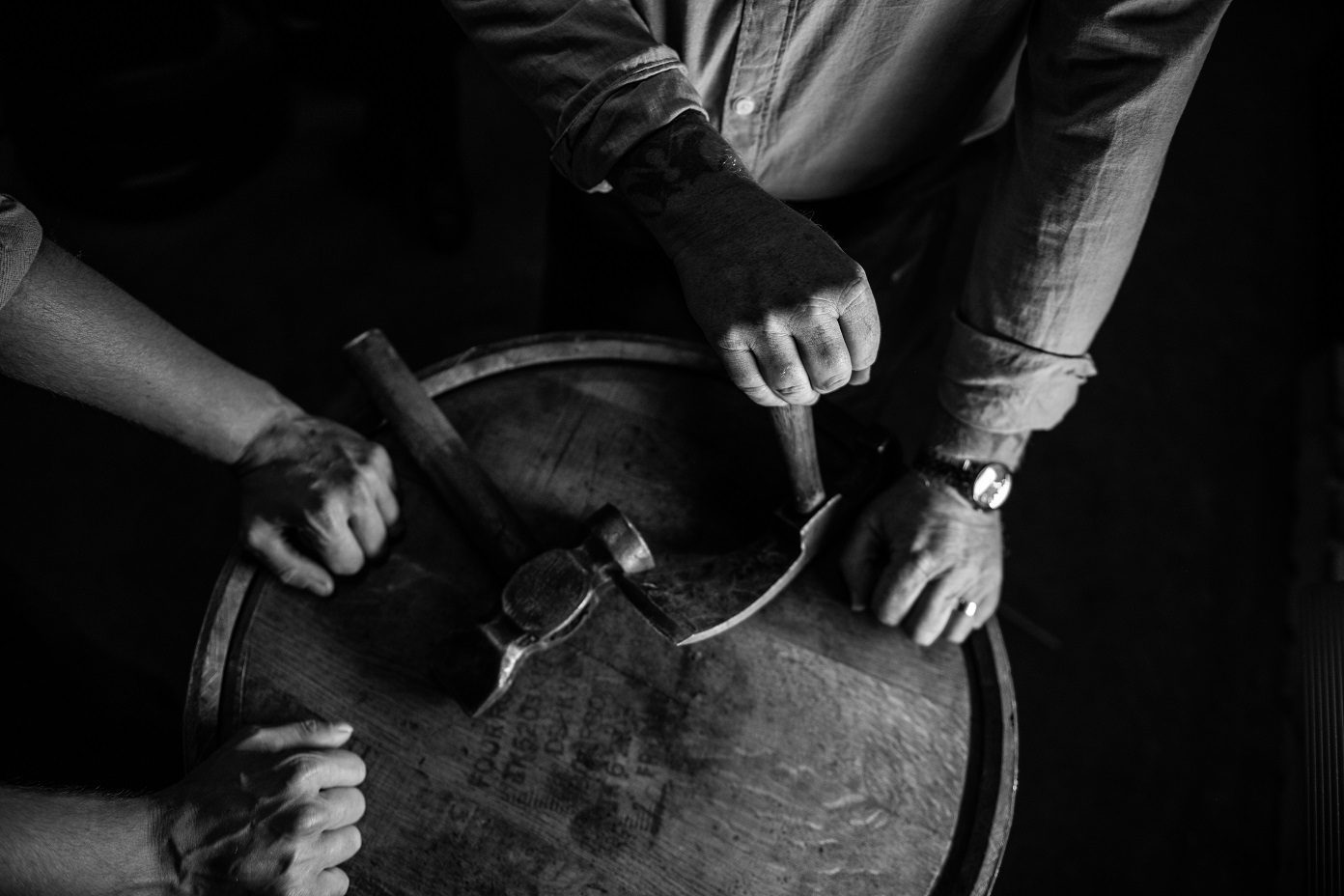 The 2011 Sauternes Cask was first aged for over seven years in oloroso sherry butts and bourbon barrels and then in rare Sauternes wine casks until bottling. The French casks that have housed this sweet white wine from the Sauternais region of Bordeaux bring an abundance of delicate summer fruit flavours and fresh grapes.

The 1995 Marsala Cask has matured for over 10 years in the oloroso sherry butts and bourbon barrels normally associated with Bushmills whiskeys, before being aged in rare Marsala casks sourced from the island of Sicily for 15 years. Having been soaked deeply into the oak grain, this dark sweet Italian wine imparts succulent spiced fruit notes and a brown sugar sweetness. 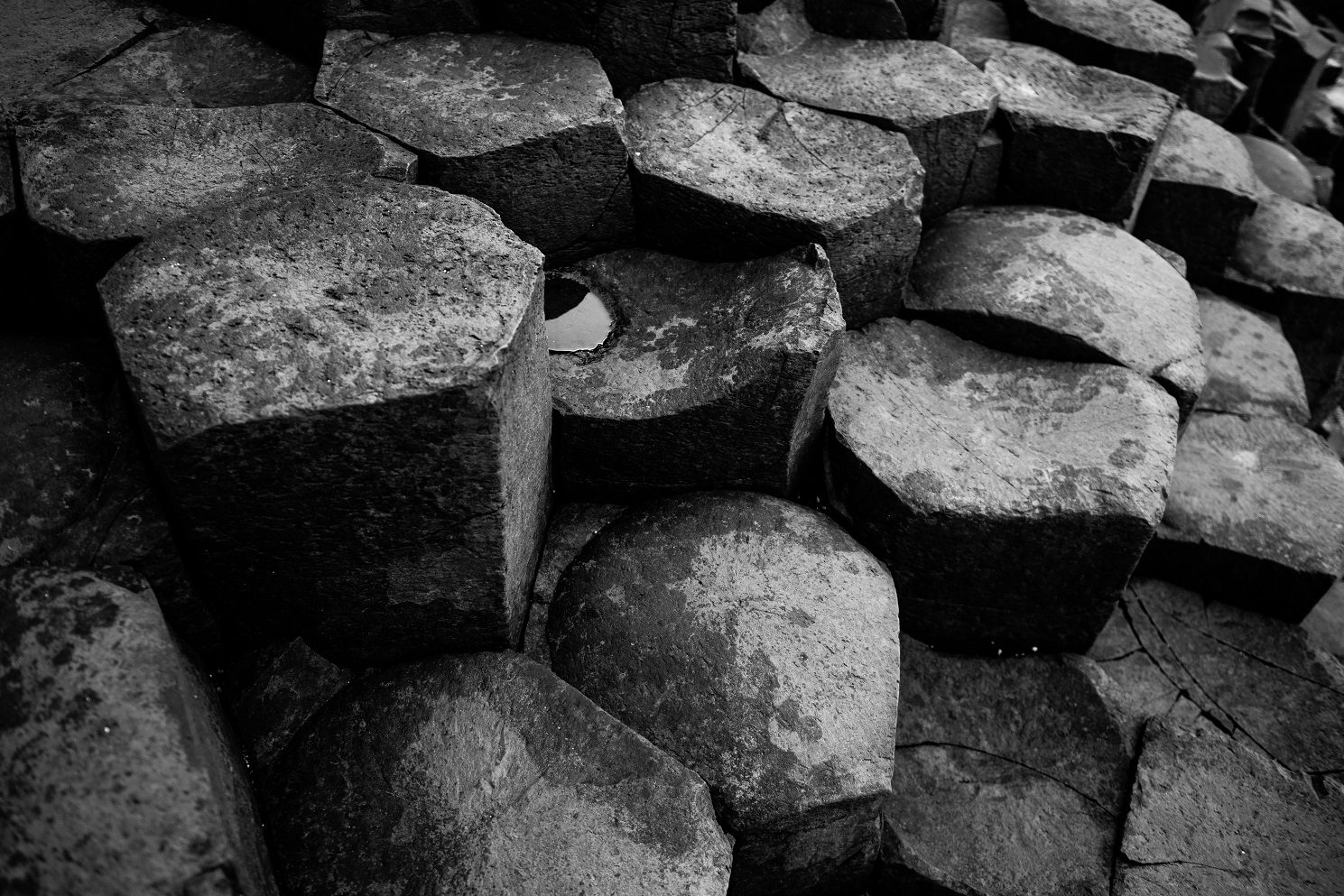 The Giant’s Causeway by Ruth Medjber

A stone’s throw from the distillery, the Giant’s Causeway has been a source of inspiration to Bushmills’ master distillers for centuries. An elemental and enigmatic place of wonder, legend and geology, its extraordinary hexagonal basalt columns, shaped over millennia, form a unique interlocking series of steps found nowhere else in the world.  Like the columns, Bushmills Causeway Collection is forged in salt-laden air and mineral-rich water.  It is the legacy of giants before and giants to come, with each layer building on the last.

“All the whiskeys used in The Causeway Collection have been expertly crafted and cared for in a unique whiskey-making tradition passed from generation to generation for more than 400 years here at The Old Bushmills Distillery.” 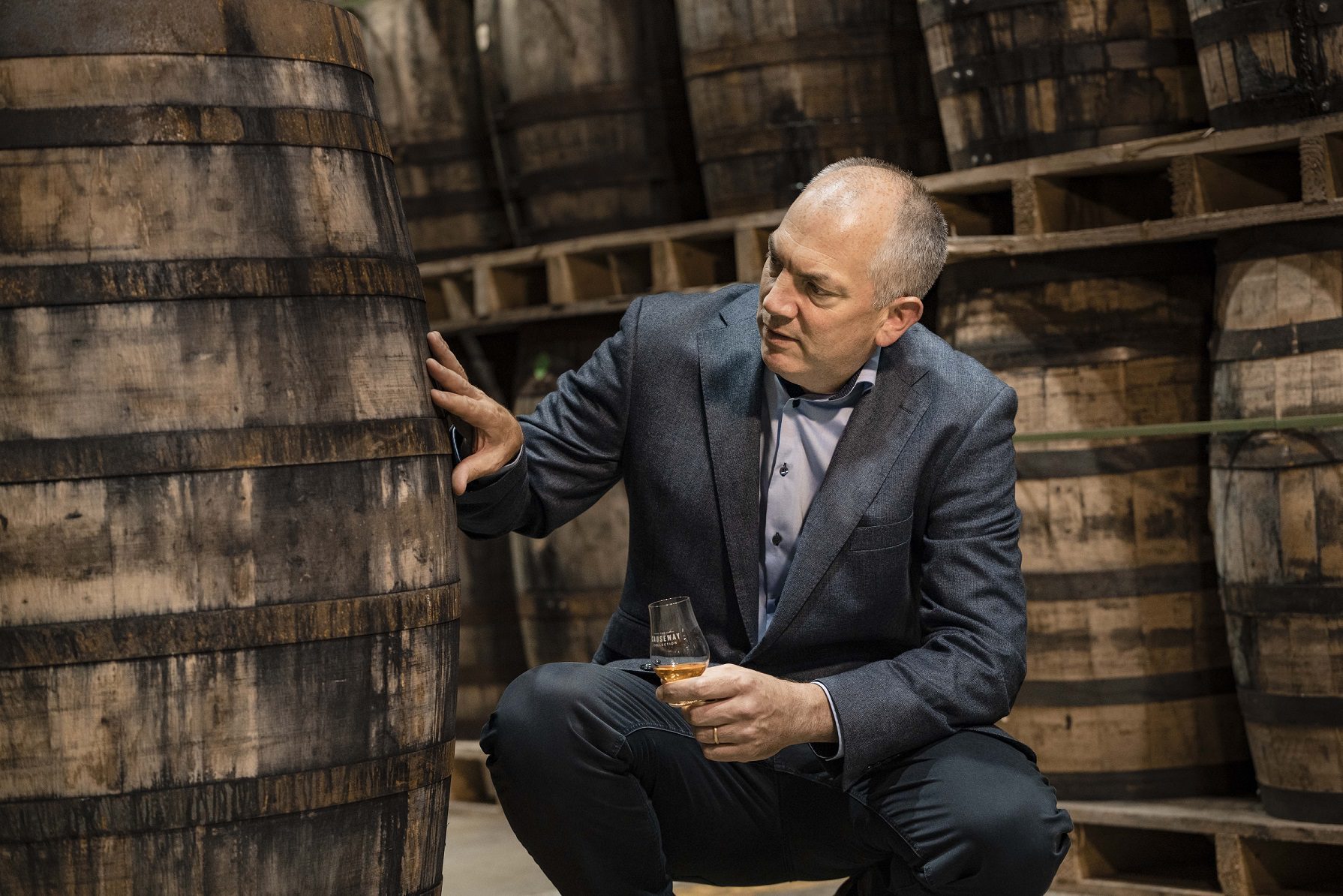 “The Causeway Collection celebrates our extremely rare and unique cask finishes, our passion for single malts and honours our rich heritage. It’s a privilege to work with such rare liquid, these special cask-finished whiskeys really are our greatest treasures.”

“Both the 2011 Sauternes Cask and the 1995 Marsala Casks are sensational whiskeys that stand with the best of Irish single malts, giants in their own right. We are delighted to bring these exclusive releases to our fans across the island of Ireland.”

To celebrate this special release, Bushmills Irish Whiskey has collaborated with three renowned Irish artists to craft a short film that brings together words, music and images to reflect the home of the Causeway Collection. Irish spoken word artist, Stephen James Smith, has used his poetry to bring to life the story of Bushmills accompanied by photography from Ruth Medjber and music by Kormac. 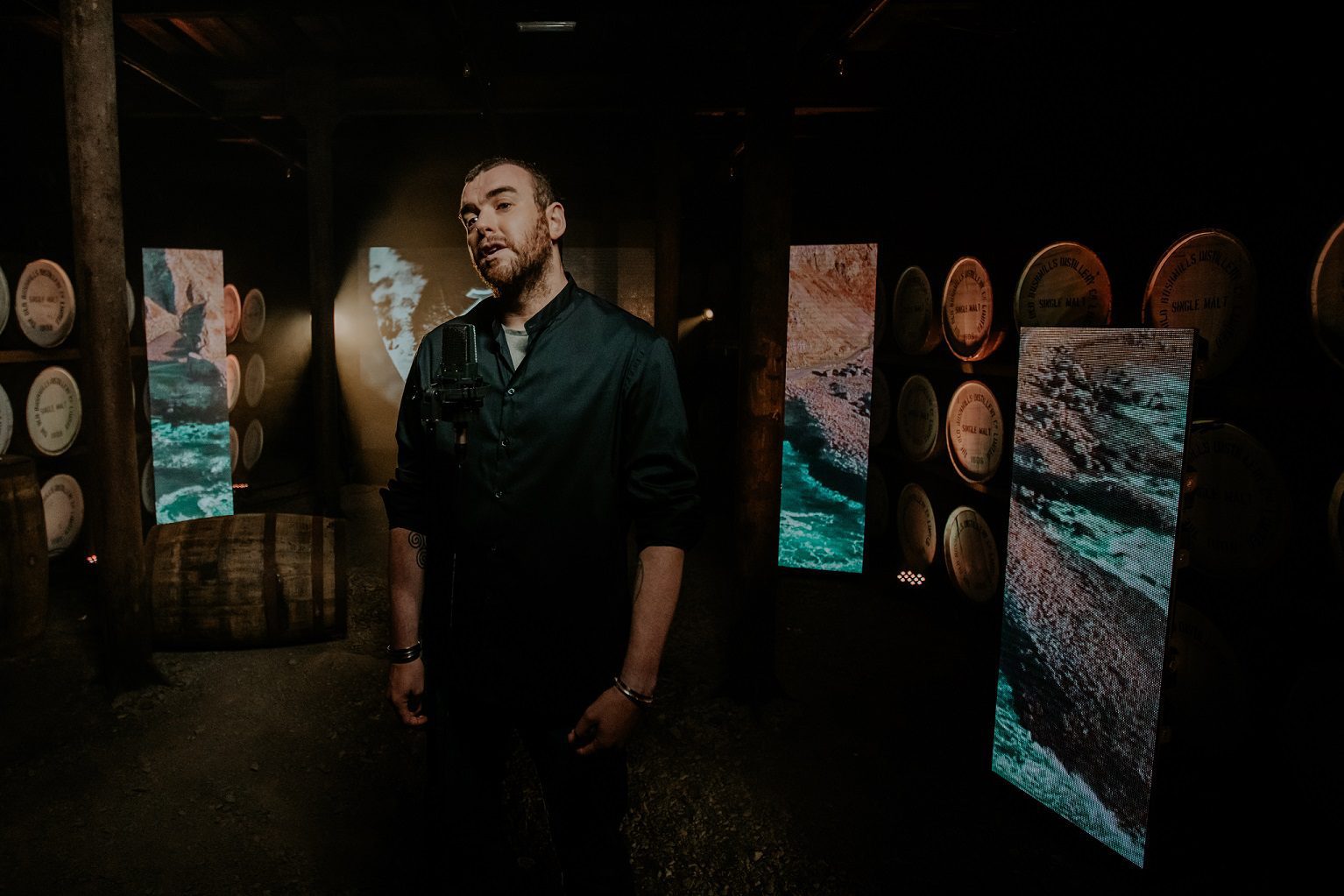 The film, inspired by the heritage and craft of Bushmills Irish Whiskey, celebrates connections between people, the whiskey and the land, as well as the creative connections that happen when we come together.

Someday you should walk the causeway route along Runkerry beach and follow the River Bush beside the train tracks adorned with blackberries, buttercups and dandelions which lead into Bushmills village.

People that know better than me say about 50 millions years ago a volcanic fissure eruption formed around 40,000 interlocking basalt columns. However, I like to think it’s just as easy to believe the old myth where the Irish hunter Finn McCool built these hexagonal steps creating a link to Scotland.

Time might move on, but a singular path leads us here. To a fertile valley where an underlying geology of basalt makes the water hard, but it’s not hard to see how life can be idyllic here and why the waters flow with Atlantic salmon and brown trout.

It’s time to cast aside aspersions and immerse yourself in what connects us all. Are we not all tributaries of the same old river? So if a place makes a people, and people make traditions, it’s the intergenerational family values distilled into the water from St Columb’s Rill that creates this elixir.

Honouring heritage is more than the malting of barley, it’s more than ancient copper kettle pots with their swanny necks, it’s having the resilience and confidence to have faith in what you do, rarity should be held dearly.

Here, it’s the hands of 3rd and 4th generation Coopers that hold things together, who risk splinter and hammer blow to bung a barrel. With a touch they understand the swirls in the grain of a white oak. Amongst all the iron hoops and mild steel, there is something more solid that solders these kin to this atelier.

You know this is just part of our story

The first raising of a glass toasting the Angel’s share

You know it’s people and new encounters that makes us dare.

It’s in meeting each other halfway we learn to shorten the greatest distance.

Someday that journey you promised to make will start today.

These rare whiskeys will be on sale online from 4pm on 23rd September and also via select specialist retailers in Ireland from 24th September.

To buy online, check out IrishMalts.com 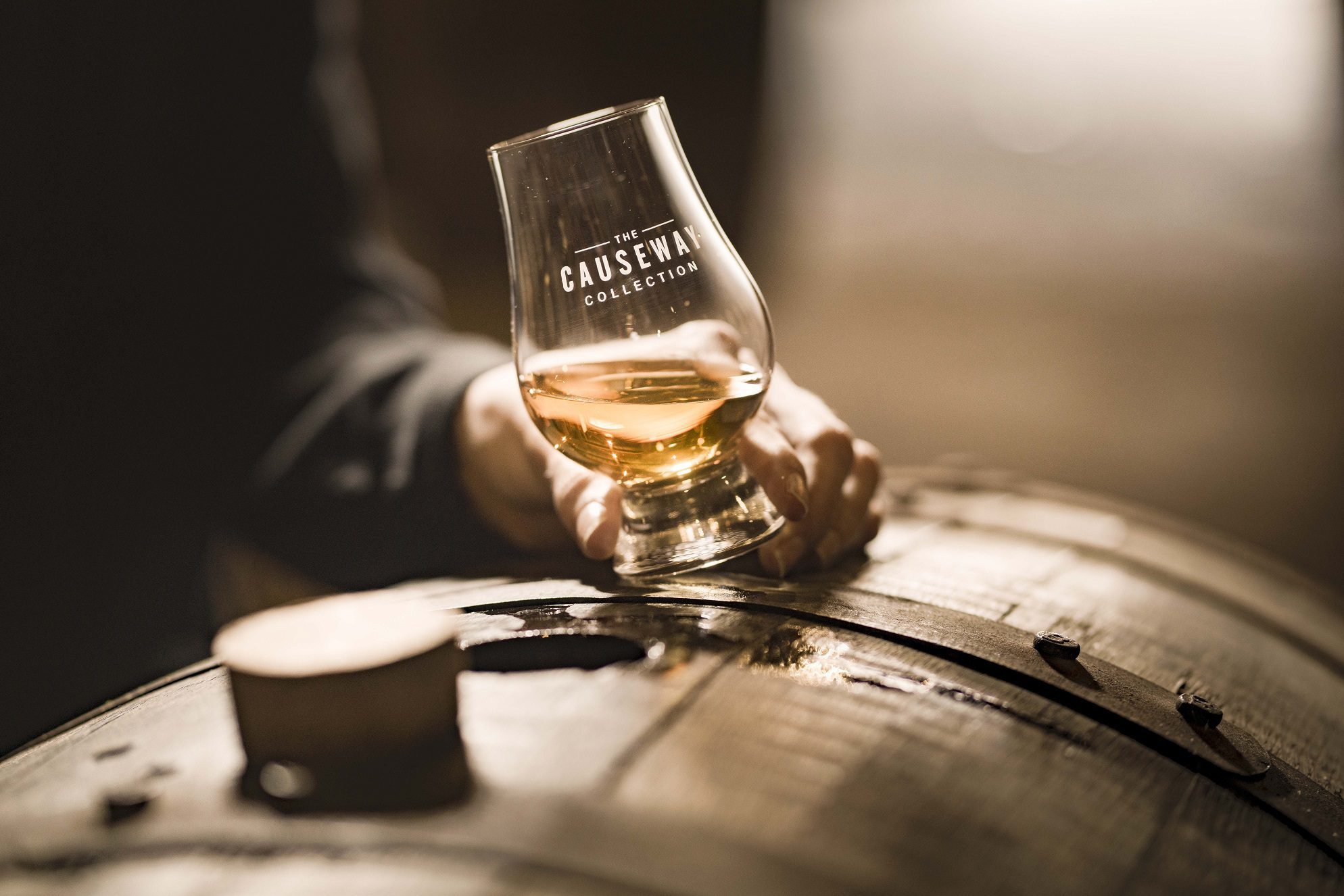 I was delighted to be invited to the official but virtual launch event this afternoon hosted by Bushmills’ Master Distiller Colum Egan and Brand Ambassador Lauren McMullan. Bushmills kindly sent me a beautifully presented tasting set in advance of today’s event. And yes, the stone coaster is actually made from basalt rock from the Giant’s Causeway. 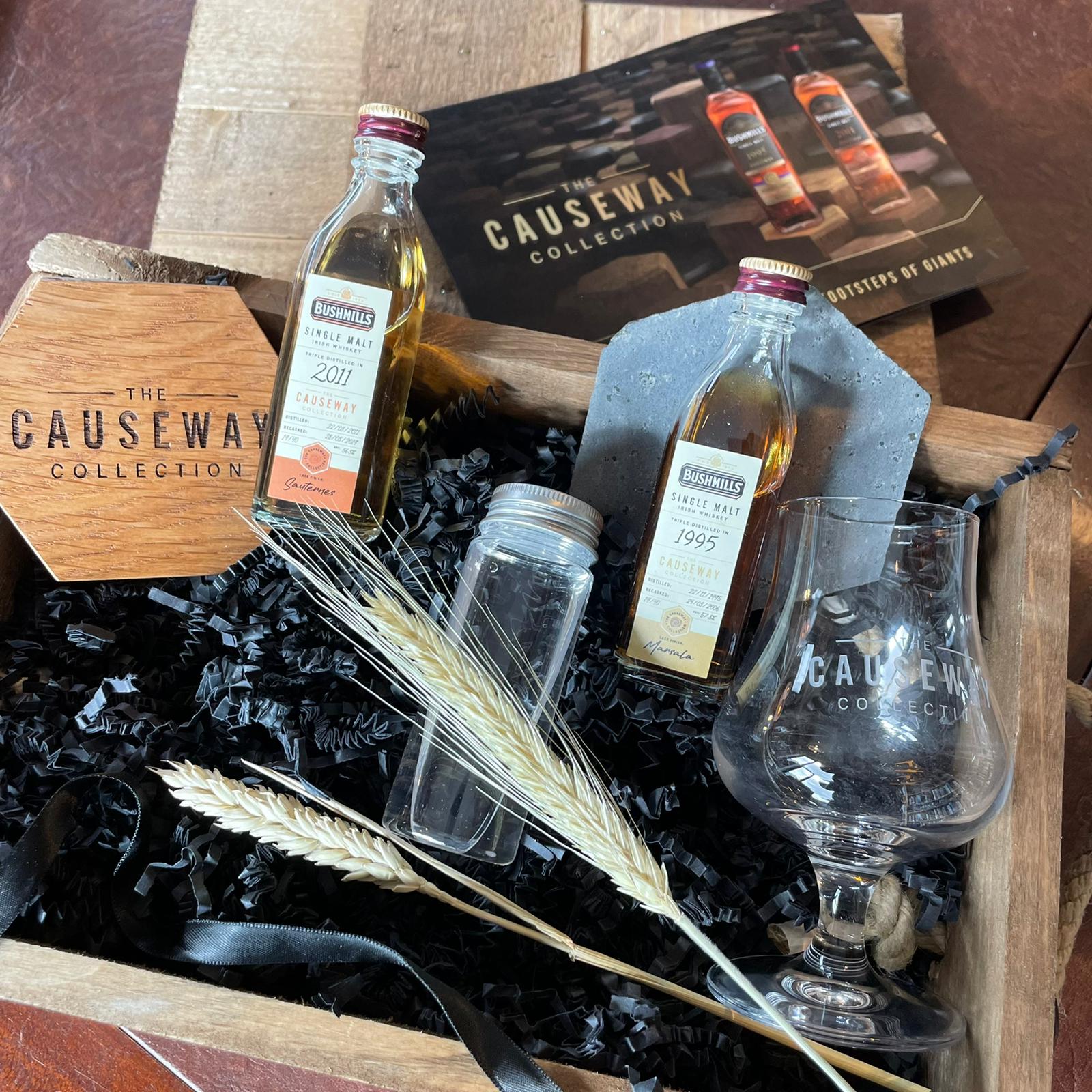 Another really nice touch along with the bespoke nosing glass, was a small phial of water from St. Colum’s Rill a tributary of the Bush River from which Bushmills takes its name. This river flows from the Antrim Hills through Bushmills to the ocean at nearby Portballintrae, all places I know well from my own time spent working the the far North West of Ireland after leaving college. This was when and where I first discovered the wonders of whiskey and the first whiskey I was introduced to was Blackbush.

My own impressions on the 2021 Causeway Collection? These are two exceptional Cask Strength Single Malt Irish Whiskeys.

The ten year old Sauternes Cask Finish from 2011 has a gentle, slightly fruity nose which complements rather than competes with the oak vanillins. The taste is classic Bushmills Malt, sweetened even more by the Sauterne influence. Not a lot of water required to tame it, even at Cask strength.

The 1995 Marsala Cask Finish is really exceptional. What a nose! Lots of seared oak, dried raisins and cask char. Deep and intriguing layers of oak, oak and more oak. At first this doesn’t make sense. I was expecting a sweet Marsala. Think about it and it all makes sense. The whiskey may have been aged for 10 years in Bourbon and Oloroso Casks and another ten years in Marsala Casks, but all twenty years plus were in oak casks. So oak, oak and more oak.

Tasting is where the Marsala influence strikes with sudden intensity. There are multiple layers of dried fruits, pimento and rich dark honey . There’s an almost viscous mouth feel fading to a long bitter-sweet finish of very dark chocolate. Even at cask strength, it can be sipped neat with none of the flavours masked by the alcohol. To fully appreciate this whiskey, add a little water to bring it to even greater heights. I found the water envelope to be quite tight as I added a drop too much on my first attempt. One of the fun things about cask strength whiskeys is that the last person involved in making this whiskey is you as you add that final touch of water to make the best version of this whiskey just for you. This is why it’s considered “slightly” rude in Ireland to water another person’s whiskey!!

Is this whiskey worth four hundred dollars, pounds or euros a bottle? Absolutely, if you can afford it. Think of it this way. There are twenty standard servings in a 700 ml bottle of whiskey equating to twenty quid, bucks etc per glass.. So ask yourself this. Are there at least twenty occasions each year or two that you should treat or reward yourself with a really special €20 whiskey treat? If so, then this is bottle to buy and drink, not keep. One of the best Irish Single Malts that I have tasted this year.

Biographies of Artists working on the project

Whiskey is a wonderful mix of nature, science and engineering. But it is the art of the whiskey maker in how they apply the science with skill and experience that makes each whiskey a unique work of art in it’s own right. What better way to commemorate two great whiskeys than to collaborate with other artists working in their chosen mediums of music, light and words 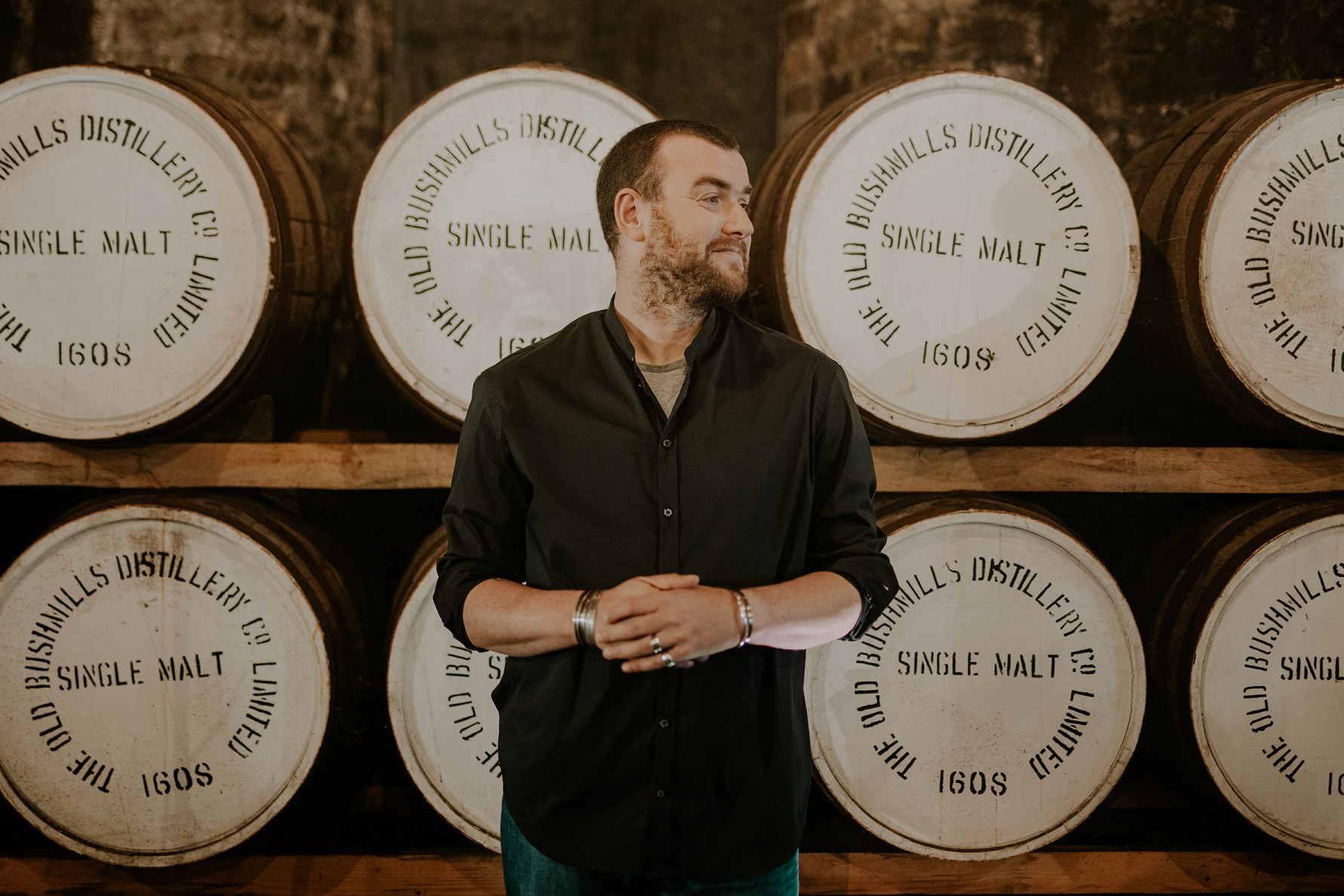 Stephen James Smith is a Dublin poet and playwright central to the rise of the vibrant spoken word scene in Ireland today. To date, his poetry videos have amassed over 1 million views online. Stephen has performed his poetry at high profile events and festivals around the world. His work has been translated into Irish, Spanish, Slovenian, Polish, Dutch and Italian.

Dublin-born and globally based Ruth Medjber has regularly contributed to Hot Press, NME, Rolling Stone, Kerrang! and Classic Rock. Medjber’s portfolio includes portraits of Grace Jones, Hozier, Metallica and the Foo fighters. Most recently, she documented Arcade of fire on their tour of the UK and Europe, as well as covering the Glastonbury Festival for the BBC. Her book “Twilight Together” was nominated for the Irish Book Award.

Championed by everyone from Annie Mac to DJ Yoda, Kormac started out as out as a hip-hop scratch DJ and MPC beat-maker. He has matured into an artist who brings a totally unique approach to his art, twisting samples and meticulous recordings of acoustic instruments into something entirely unique. His last album was nominated for the Meteor Choice Music prize. He is currently writing the soundtracks for two multi-episodic TV series and recording his next album Equivalent Exchange with The Irish Chamber Orchestra and guests.

THE MACALLAN EDITION NO.5; A CELEBRATION OF THE MACALLAN’S NATURAL COLOUR