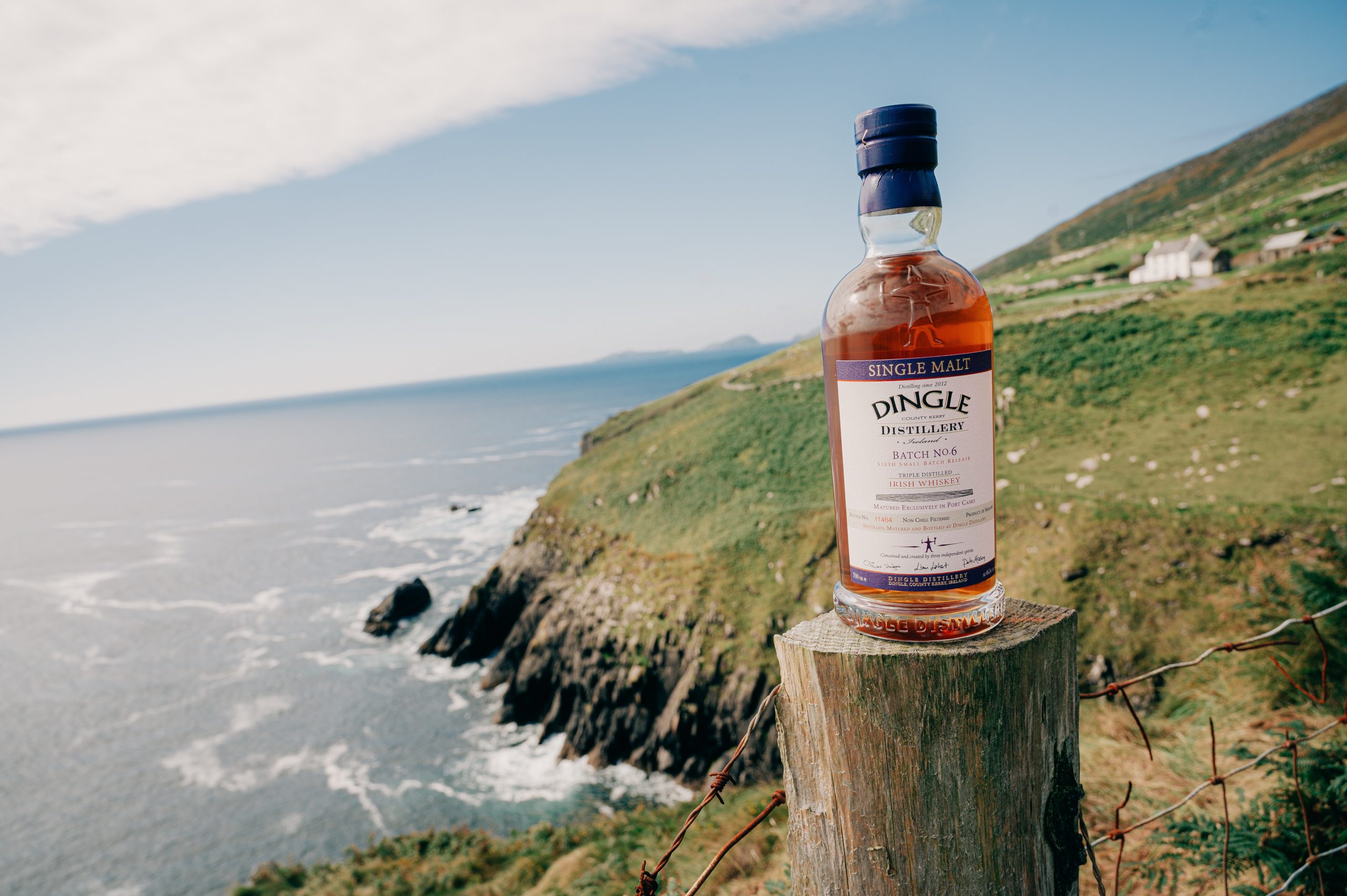 The new single malt whiskey (46.5% ABV) will be available to purchase from 30th September 2021 at DingleDistillery.ie, IrishMalts.com, Celtic Whiskey Shop and across independent off licenses nationwide.  According to the information provided by Dingle Distillery’s press and media team,

Why oh why do Whiskey Marketing folks make a virtue of proclaiming the “use” of “Non Chill Filtration” in whiskeys of 46% ABV and above? (we don’t do something to our whiskey that it doesn’t need??) But, maybe I’m missing something here? Now if your whiskey is non chill filtered at 40% ABV, that would be a Unique Selling Point (he said “innocently)”. But, tongue in cheek nit-picking aside (its been a long day!), I’m very glad that they don’t chill filter, whether needed or not, as a signature element of Dingle Single Malt is the fruity flavoured esters from fermentation, much of which could be stripped out if the whiskey was chill filtered.

But full marks here to Dingle for the “no colouring“. This is a growing and most welcome trend within the premium end of the Scotch Whisky and Irish Whiskey sectors. I’m delighted to say that more and more press releases being sent to me (The Macallan, our own Portmagee, Highland Park etc.) in recent months include this very worthy USP. Over the last few years I’ve seen some positively mahogany-coloured three year old whiskeys for sale. None had virgin oak or sherry cask finishes to account for the rich dark hues of their spirit which unsuspecting or naive buyers equate with age and quality.

I see this as a hopeful sign that the distillers, blenders and even independent bottlers in Scotland and Ireland are regaining control of quality assurance, identity and presentation from the focus-group driven whiskey marketeers. Well done Dingle and may the trend continue so that whiskies and whiskeys can regain their true natural colours. Sometimes it is better to give the customers what whiskey is rather than give them what they think it should be. As Polonius advised, “To thine own self be true”.

Back to Batch 6! I have bottles of Batch 3 (Bourbon and Port Cask Finish) and Batch 4 (Bourbon, Double Sherry and Port Cask Finish) here beside me in my own collection and as I nose both this evening, my favourite is still the Batch 3 with the heavier Port Cask influence. Dingle is always a meaty malt and pairs really well with an equally robust finish such as Port. I’m really looking forward to Batch 6 with an All-Port finish. I am absolutely sure that Batch 6 will be “Single Malt for grown ups” and will ensure that the Dingle Batch Series goes out in a blaze of glory with the best of these six great Irish Whiskeys left to last.

“It has been my pleasure to be a part of Single Malt Batch 6 distilling process. Our Single Malt Batch 6 is fully matured exclusively in Tawny Port Casks, Batch 6 is a great of example of the interaction between Single Malt spirit and Fortified wine. A whiskey with multiple layers of sweetness and a well-balanced depth of flavour. It really is a must try, even more so as it is the last in the series.”

“We are delighted to launch our Single Malt Batch 6, the last in a series of carefully curated whiskeys. This launch will be of particular interest to those who have followed our journey since our first batch release in 2016 but also for those who want to experience the art of the Dingle Whiskey distilling process through the final Single Malt Batch in the series. At Dingle Distillery, we always endeavour to create really special and unique products and we think this is evident in Single Malt Batch 6. We are really proud of this launch and can’t wait for whiskey fans to try it.”

As mentioned in my last piece about Dingle a few weeks ago, while this may be the end of the Single Malt Batch series in favour of a “single” core Single Malt expression, it is very likely that there will continue to be bespoke premium and super premium whiskey expressions from the distillery in coming months and years. But in the meantime, I’m really looking forward to buying a few bottles of Dingle Single Malt Batch 6 Port Finish next week.

Dingle have kindly supplied a short reminder of the other five whiskeys in the Dingle Single Malt Batch Irish Whiskey Series.

Single Malt Batch 2 – Single Malt Batch 2 was created through the marriage of specially selected Sherry (Pedro Ximenez and Oloroso) and Bourbon casks. The second in the Single Malt series was released in 2017 and had 6,000 bottles produced with an ABV of 46% whilst the distillery’s first Pot Still Whiskey had 600 bottles available worldwide.