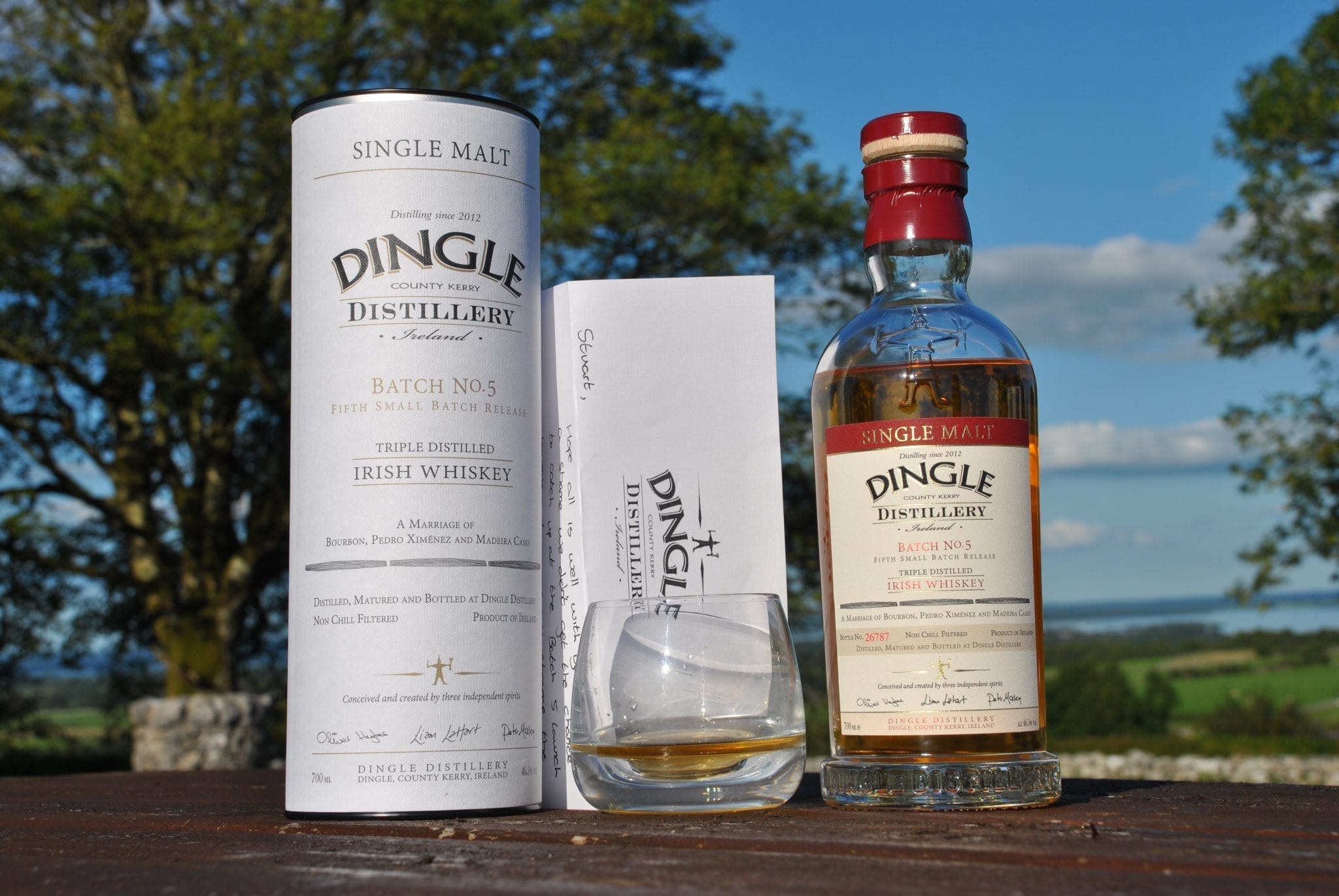 Dingle Batch No. 5 is the latest Whiskey expression from Dingle Distillery in Kerry.

Dingle Batch No. 5 is the second batch released under the watch of master Distiller Graham Coull who joined the Dingle Distillery Team in October 2019. It is also the largest batch release yet by Dingle at 35,500 bottles. Five hundred of these will be bottled at cask strength in tribute to the 500 “Founder” investors who each supported the distillery launch by investing in the very first 500 casks distilled. 9,000 bottles of Batch No. 5 will be reserved for the American market, with the remaining 27,500, allocated to Ireland, Europe, Australasia and Asia. This is a confident move and statement from a distillery who only produced four casks of new make spirit a day. 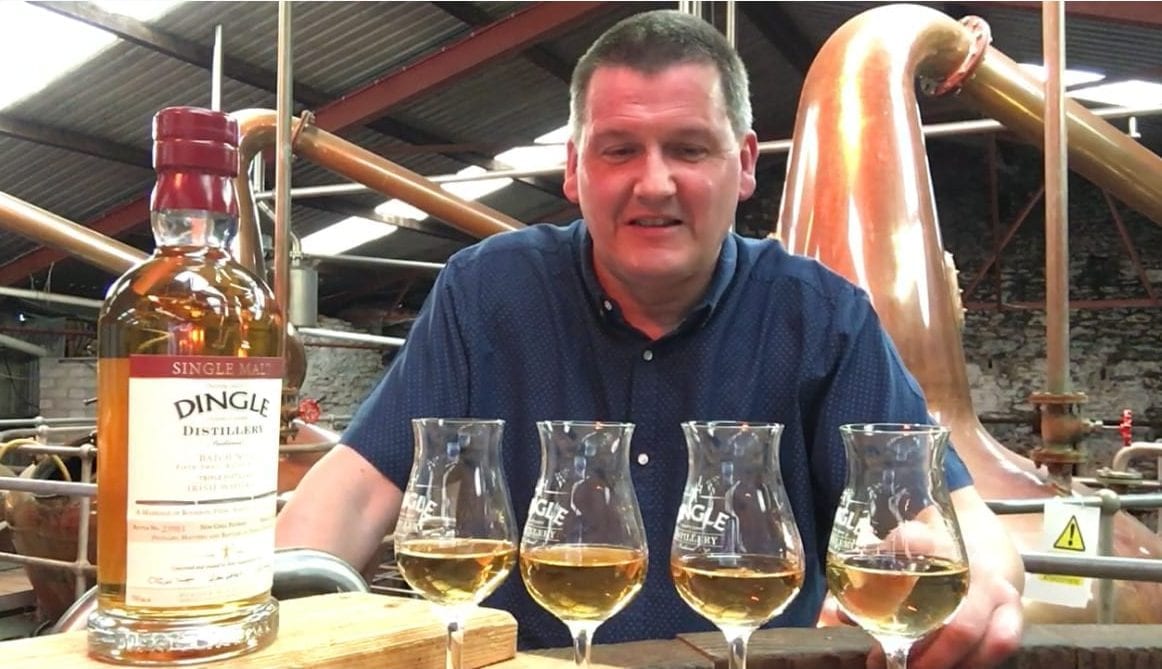 The Batch 5 bottled at 46% ABV will retail in Ireland at €70. The Cask Strength bottled at 59.3% ABV will be sold exclusively through IrishMalts.ie at €150 per bottle and a limit of one bottle per customer. The Dingle Distillery PR Team were kind enough to send me a bottle of  Batch No. 5 to review last week. The hand written personal note from one of the Directors of Dingle which accompanied the review bottle was a kind and thoughtful gesture and was very much appreciated. Such courtesy has long been the hallmark of Dingle and the folks who work both in Dingle Distillery and in their Dingle Whiskey Bar in Dublin.

As you can see from the photo (above) the tasting took place at a secret Shannon-side location on what turned out to be one of the nicer days of this unique Irish Summer.

I was joined for the tasting by two friends (people who enjoy a whiskey rather than “aficionados”) who happened to be passing by and joined me for a socially distanced, outdoor sunny whiskey tasting of Dingle Batch No.  5.

On the nose, a surprise! I had expected the rich sweet Sherry and Madeira to dominate, but it’s the Bourbon cask that leads confidently with toasted oak and vanillins. The sherry and Madeira are there, but it takes them a second or two to come forward.

On tasting, it’s all about the malt at first. This is a powerful, flavoursome Irish Single Malt, tempered slowly by the rich, dry nuttiness of the Madeira complementing the sweet, dried fruit notes of the Pedro Ximenez. The official tasting notes mention honeycomb and salted caramel and they are both evident. So too is a hint of Isla-esque iodine, no doubt a contribution from the sweet sea air of Dingle Bay. Sipped neat, there is some alcohol tingle on the front of the tongue from this 46.5% ABV Single Malt Irish whiskey. It took just a very slight dash of water to tame the tingle, but be careful, – not too much water is my advice if you want to fully appreciate the full flavour complexity of both the malt and the triple cask marriage.

The finish is long with the fortified wines slowly yielding to return, full circle to the Bourbon and Oak of the initial nose.

My two friends who joined me are both experienced world travelers and although both are Irish they would share an “american” outlook on how to enjoy their whiskey with “on the rocks” being their preferred serve. Here, this whiskey excels. Just one or two cubes of ice on a warm afternoon were enough to tame the high ABV without masking the powerful malt surges and nuanced wood finishes. American markets take note. This is an Irish Single Malt whiskey the US market should really appreciate. Quoting from the Batch No. 5 press release, Dingle Master Distiller Graham Coull believes that the use of Madeira casks in this whiskey adds a subtle complexity.

“The Madeira influence adds a great depth of flavour and a kind of backbone to this remarkable
whiskey while not masking the subtle spice from the Bourbon casks or sweet tone from the Pedro
Ximenez ones”.

“There’s no point in making an exquisite spirit if we don’t invest in the best casks
from around the world. The cool, damp Atlantic climate we have here in Dingle is one of the best for
maturing whiskey. We just make sure that our whiskey ages in the best possible woods.”

My two friends loved it and I filled a 100 cl bottle for each to take home. I have classed Dingle Batch No. 5 Irish Single Malt as a Three Pooka Irish Whiskey.

The launch of this whiskey was originally to have been back in March, but world events intervened. I look forward forward to meeting and chatting to Graham Coull and the Dingle Team when life returns to normal to find out more about their future plans. In the meantime, here’s a video Graham made some months ago for the original, but cancelled launch back in March 2020. The sound is a bit compromised as it was filmed in a working distillery, but well worth viewing for an insight into the man and the team behind the whiskey.

Dingle Distillery has reopened to visitors and follows all current Irish Government Health Guidelines and Restrictions. If thinking of visiting, do read the advice from the distillery at https://dingle-distillery.appointedd.com/

Dingle Batch No. 5 is already available in Ireland from all the usual suppliers such as IrishMalts.ie and The Celtic Whiskey Shop in Dublin. I’ll add a link for our own affiliate partners when it becomes available to this article and to The Irish Whiskey Shop, Whiskey Sales.com and The Whisky Mall .com.

The Macallan No 6 Inspired by Salmon Fishing on the Legendary River Spey.