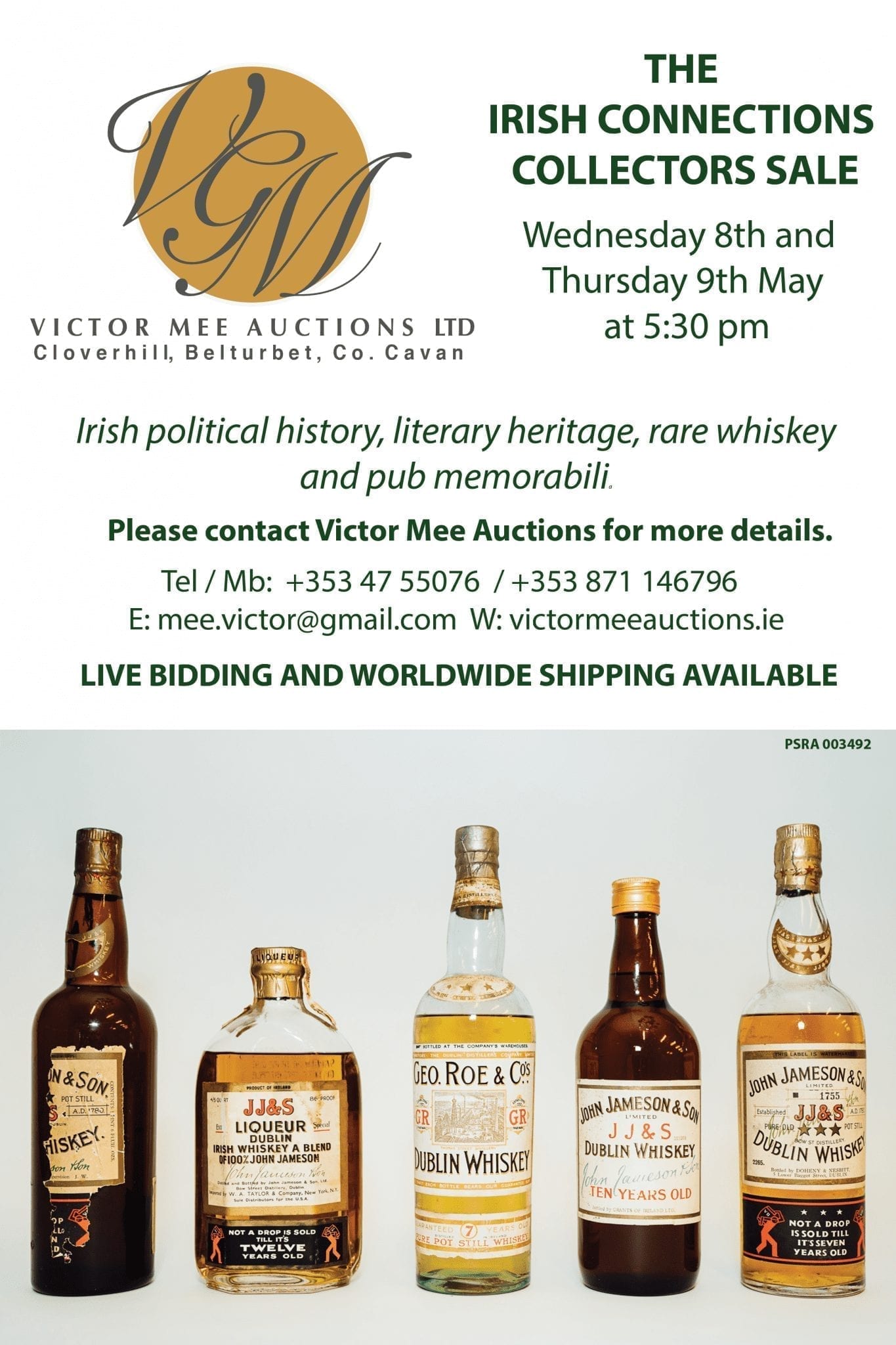 Family owned and operated auction house Victor Mee Auctions have been given the trusted role of finding the next caretakers for key pieces of Irish history in their upcoming 8th and 9th May Irish Connections Collectors sale, scheduled to take place in their Cavan-based auction house. Featuring head-turning pieces including one of only three known surviving first-anniversary copies of the Irish Proclamation, printed using the same printing blocks as the original, a vast collection of rare signed and dated books by Seamus Heaney, and a highly valuable collection of whiskies including a highly valuable 1890s bottle of precious George Roe Irish Whiskey predicted to sell within the range of €6,000 to €12,000 to a keen collector.

With bidders currently registered from across the globe including enthusiastic Irish-American bidders, high-end whiskey collectors from Hong Kong, and Irish history collectors from across Ireland and further afield, this sale is reflexive of the increasing popularity of Victor Mee Auctions as a leading auction house in Ireland with a trusted reputation in selling high-quality and unique pieces.

Irish Whiskey and advertising is a continuing area of expertise for the family run auction house and a prominent theme in many sales, with this sale being no exception. Hitting the auction block this May will be an exquisite collection of Irish whiskey from Des McCabe, previously the owner of a pub in Warrenpoint, inherited from his Aunt from County Armagh including a showstopping piece which is gaining attention from enthusiastic collectors world-wide, a precious 1890s bottle of George Roe Irish whiskey – one of the rarest bottles of Irish whiskey to ever come on to the market.

Remarking on the rarity of this bottle, Bryan Mee at Victor Mee Auctions said, “Unfortunately these bottles were just drunk and not saved. The bottle itself is in excellent condition with some evaporation and depicts the Thomas Street Distillery. It is estimated to sell within the range of €6,000 to €12,000 to a keen collector and we are very excited to see the turnout for bidders who for this piece who will tune in online, by phone, and come to our auction house to bid in person.”

George Roe Whiskey had its beginnings in 1757 when Peter Roe bought a small distillery on Thomas Street in Dublin. Roe whiskey passed through many hands of Roe’s from 1757 to 1832, during which time another distillery was founded on Pimlico street by Nicholas Roe. It was in 1832 that George Roe took over both distilleries to consolidate and expand them into a large complex. The resultant organisation became George Roe & Company or Geo. Roe & Co. distillers. In 1887, George Roe & Company became the largest distillery in Europe, and at that time the Thomas Street distillery covered seventeen acres, producing over two million gallons of whiskey annually.

In 1889 George Roe & Co. Distillers joined William Jameson & Co and the Dublin Whiskey Distillery (D.W.D) to form a trading unit called the Dublin Distilling Company Ltd. Each distillery continued to market its own whiskey under its own name, but during the late 19th and early 20th centuries – a difficult period for the whiskey industry in Ireland due to increased competition from Scottish whisky, prohibition in the United States and the decline in the social and economic power in Ireland which caused many distilleries to fail – Geo. Roe & Co. Distillers along with its two partners ceased to produce whiskey in 1926, leaving large quantities of unsold stock. It wasn’t until the mid-1940s that Geo Roe & Co. distillers dissolved, and Guinness took over the site of the old Roe Thomas Street distillery. 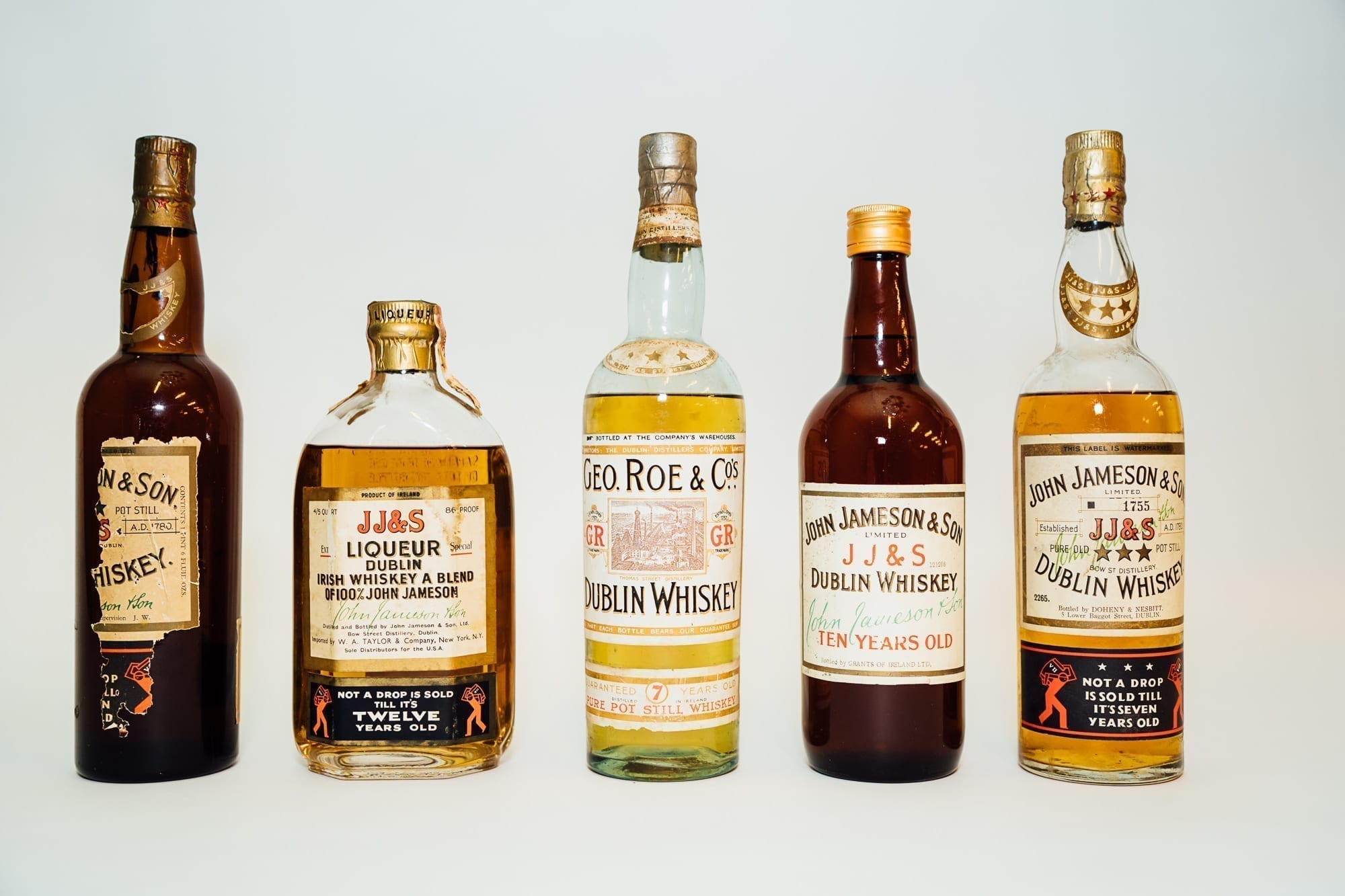 In addition to this historic label of George Roe Whiskey, the sale at Victor Mee will also include a rare 1940s JJ&S Liqueur Dublin Irish Whiskey, a blend of 100% John Jameson whiskey, distilled and bottled by John Jameson & Son Ltd. The hexagonal shaped bottle with includes a label which discloses, `Not a drop is Sold till it`s Twelve years old.’ Imported into United States by WA Taylor & Co. New York, this particular bottle was sold in America only and it is very rare to find it unopened and completely sealed. This bottle – which features some evaporation due to age – was most likely brought back to Ireland as a gift by a distant cousin and is estimated to sell for €800 to €1200. 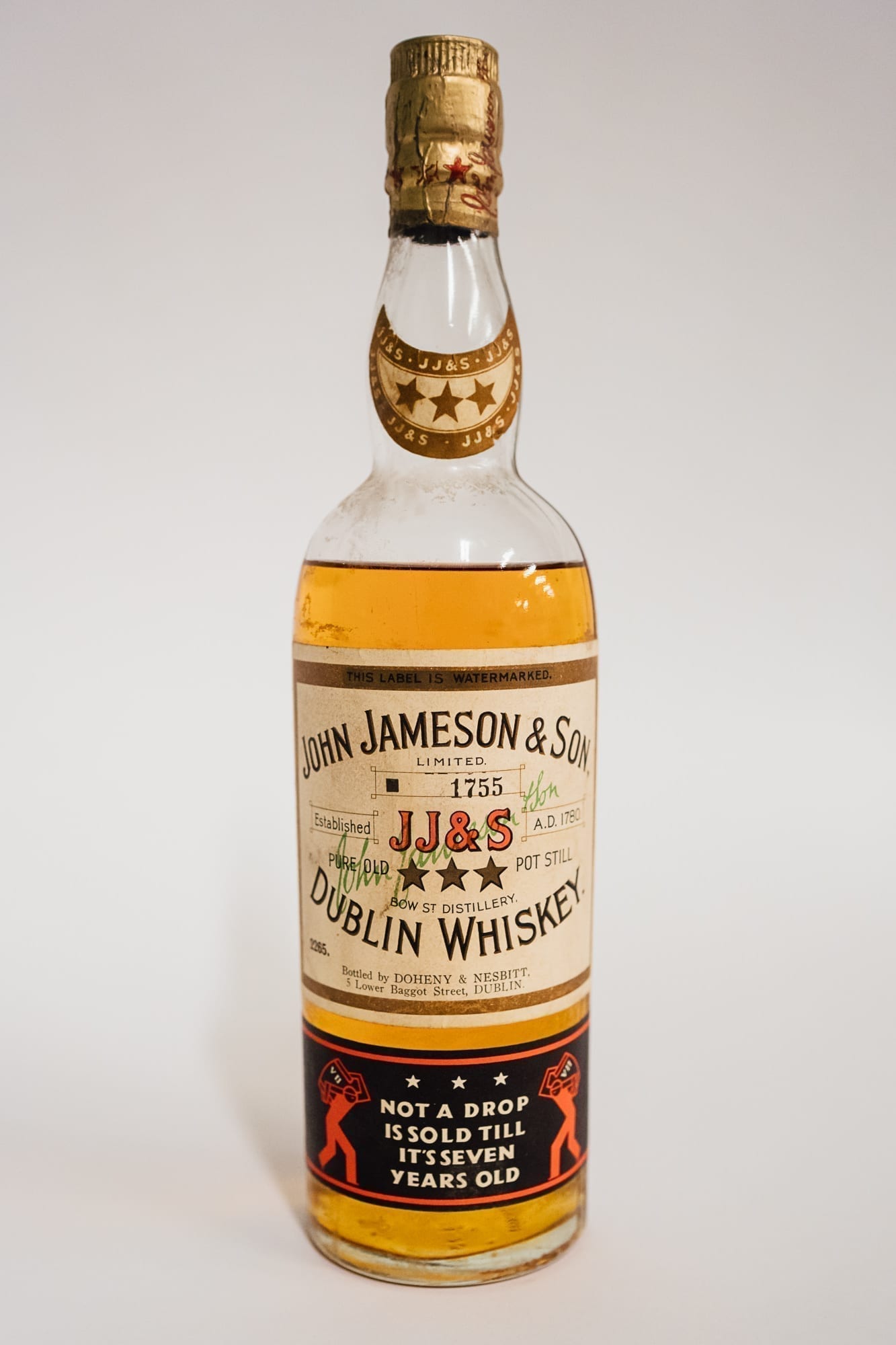 In addition to these outstanding bottles, the team at Victor Mee are also expecting high interest in two bottles of 1950s John Jameson Whiskey, estimated to earn €400 to €600 and the above Rare 1940’s bottle of John Jameson & Sons Dublin Whiskey Bottles by Doheny and Nesbitt 5 Lower Baggot Street Dublin with an estimate of between €6,000 and €12,000.